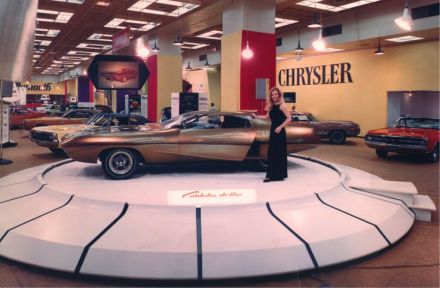 The Chrysler Cordoba de Oro was a concept car unveiled at the Chicago Auto Show in 1970. Designed by Elwood Engel, Chrysler’s design chief from 1961 to 1974, the future-forward vehicle had a cantilevered roof, no A-pillars (the vertical supports in the window area connecting the roof to the car body), and experimental, grille-shaped headlights. The wedge design became popular with auto designers in the late 1960s, and would eventually make it to the high-end market in the 1980s with the DeLorean DMC-12, the Lotus Esprit, and the Lamborghini Countach. The cantilevered roof and absent A-pillars hark back to 1956’s Chrysler Norseman, designed by Virgil Exner, Engel’s predecessor at Chrysler. (The Norseman was built in Italy and never made it to the U.S. While slated to appear at Chrysler’s 1957 auto show, the single model was shipped on the SS Andrea Doria, which sunk off the coast of Nantucket, Massachusetts, on July 26, 1956.)

Engel is remembered mostly for his work on Chrysler’s turbine cars and his muscle car designs, the latter of which include the 1968 Dodge Charger (his 1966 Charger prototype bears some resemblance to the Cordoba de Oro), the 1970 Dodge Challenger, and the 1970 Plymouth Barracuda.