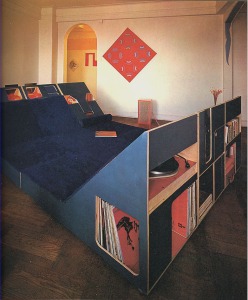 The return of millions of American veterans in 1945 resulted in something of a dilemma: there were not enough homes for them and their rapidly expanding families. Spurred by low interest rates provided by the G.I. Bill, as well as low-cost housing (a furnished home could be had for as little as $400 down) resulting from mass production methods introduced by real estate developer William Levitt (a Seabee during WWII) and others, the rate of US home ownership grew from 43% during the great depression to 62% in 1960, the height of the post-war boom. American families flocked to the spacious, newly exploited suburban frontier, linked together by 41,000 miles of a new Interstate Highway System.

What these new houses should look like, and what to put inside them, soon preoccupied the boomers, and home decorating magazines and books became a constant presence beginning in the 1950s. The mid-century modern aesthetic dominated until the mid-1960s, when the counterculture and the Space Age started influencing architects, designers, and artists across America and Europe. Living for Today: Low Budget High Style Ideas in Interior Design shows the influence of neo-futurism, the psychedelic “environments” of Verner Panton, pop art, and minimalism, as well as the incorporation of colorful plastics and foam molding. Ideas about the home and its functions were shifting. The boomers’ kids rejected the suburbs and created functional, lively spaces in city apartments, lofts, and basements. Others built geodesic dome houses and fiberglass houses in isolated rural locales.

At the time Living for Today was published, Karen Fisher was the Interior Decoration Editor for Cosmopolitan, a once-flagging literary magazine refashioned into a manifesto for single career-women by Helen Gurley Brown in 1965. (Brown got the editor-in-chief gig following publication of her bestselling Sex and the Single Girl—a founding document of the sexual revolution—in 1962.) Fisher, who also wrote for Esquire and Advertising Age, became a freelance interior decorator in the 1980s, when interior design became irrevocably associated with yuppies and the jet set.

One thought on “Selections from ‘Living for Today’ by Karen Fisher, 1972”