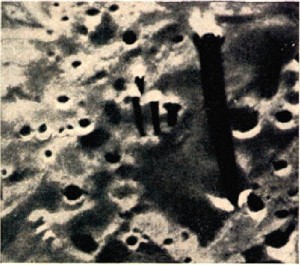 Photo from Lunar Orbiter 2 showing six to eight “spires” and their shadows, 1966 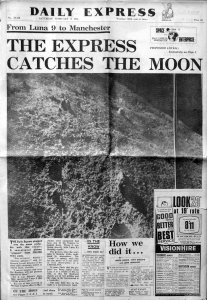 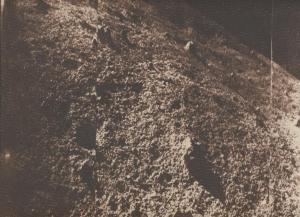 The original image transmitted from Luna 9 and captured by Bernard Lovell at the Jodrell Bank Observatory in Manchester, 1966

The first unmanned spacecraft to land on the Moon and transmit photographs back to Earth was Russia’s Luna 9, launched on January 31, 1966. It landed in the Ocean of Storms on February 3, and sent the first of nine images of the Moon’s surface seven hours later. One of these photos, according to an Argosy article by Ivan T. Sanderson from 1970, showed what appeared to be “two straight lines of equidistant stones that look like the markers along an airport runway.” (The photo was first published by Manchester’s Daily Express, after English astronomer Bernard Lovell intercepted the transmission.) A Russian scientist by the name of S. Ivanov, allegedly the “winner of a Laureate of the State Prize,” wrote that the “objects as seen in three-D seem to be arranged according to definite geometric laws.”

Another photograph, this one taken by America’s Lunar Orbiter 2 over the Sea of Tranquility in November 1966, showed what the Washington Post called “6 Mysterious Statuesque Shadows,” with one unidentified scientist referring to the region as the “Valley of Monuments.” Newsweek covered the photo the following week, and on February 1, 1967, the Los Angeles Times quoted an anthropologist named William Blair, who intimated that the structures (now numbering seven), along with a 70-foot “rectangular shaped depression or pit directly west of the largest spire,” were “like an excavation whose walls have been eroded or fallen inwards.” Blair worked in Boeing’s biotechnology unit, and the lunar objects were subsequently named the “Blair Cuspids.” (The Chief of NASA’s biotechnology division at the time was John Billingham; researchers in the neighboring exobiology division introduced him to 1966’s Intelligent Life in the Universe by Iosif Shklovskii and Carl Sagan, which inspired Billingham to start SETI.)

Russian scientists were also intrigued by the Orbiter photograph, and a rendering of the apparent obelisks, along with their “precise geometric configuration,” appeared on the cover of Tekhnika Molodezhi (“Technology for Youth”), a Russian popular science magazine, in 1968. By 1970, the ancient astronaut hypothesis had taken hold in both the US and Russia, thanks to Erich von Däniken’s Chariots of the Gods? (1968), an immediate sensation in Europe. In fact, both countries were covertly or overtly studying occult subjects, especially psychic phenomena, in a desperate effort to gain a lasting advantage in the Cold War. The Argosy article was based almost completely on the research of Lynn Schroeder and Sheila Ostrander, who visited Russia (allegedly “at the invitation of Russian scientific organizations”) and parts of the Eastern Bloc in the late ’60s to write Psychic Discoveries Behind the Iron Curtain (1970), which received positive reviews from the Los Angeles Times and Kirkus Reviews.

The Blair Cuspids were not the first intriguing structures spotted on the surface of the Moon. In 1953, John J. O’Neill, then science editor for the New York Herald Tribune and an amateur astronomer, caught what he called a “gigantic natural bridge” while surveying Mare Crisium. He sought confirmation with other astronomers, and the British Astronomical Association’s Hugh Percy Wilkins detected not only the bridge but sunlight beneath it—as well as the bridge’s shadow. Wilkins went so far as to describe it as “artificial” in a BBC radio interview in December, clarifying that “it looks almost like an engineering job.”

Ultimately, speculation about extraterrestrial architecture goes back to Percival Lowell, an American businessman and astronomer who popularized the idea that the Martian “canals” discovered and illustrated by Giovanni Schiaparelli in 1877 (the Italian canali means “channels” or “trenches”) meant life once existed and thrived on the Red Planet. H.G. Wells, inspired by Lowell’s many illustrated books, moved the spotlight closer to home in First Men in the Moon (1901), a seminal science fiction tale about two Englishmen (a quirky scientist and a get-rich-quick entrepreneur) who discover and battle the ant-like denizens of a sub-lunar civilization.

The author of the Argosy article, Ivan T. Sanderson, was instrumental in popularizing several occult legends and pseudosciences from the late 1950s until the early 1970s, including Bigfoot and cryptozoology (a word Sanderson coined; he was trained as a zoologist and started out as a naturalist and nature writer), Atlantis, the Bermuda Triangle, UFOs, and, as we see here, “xenoarcheology.”