Cover of History of Occult Sciences (1966), which consists of a collage of religious and alchemical symbols

From Chapter 1, “The Birth of Magic,” ceremonial shields and masks from many different world cultures 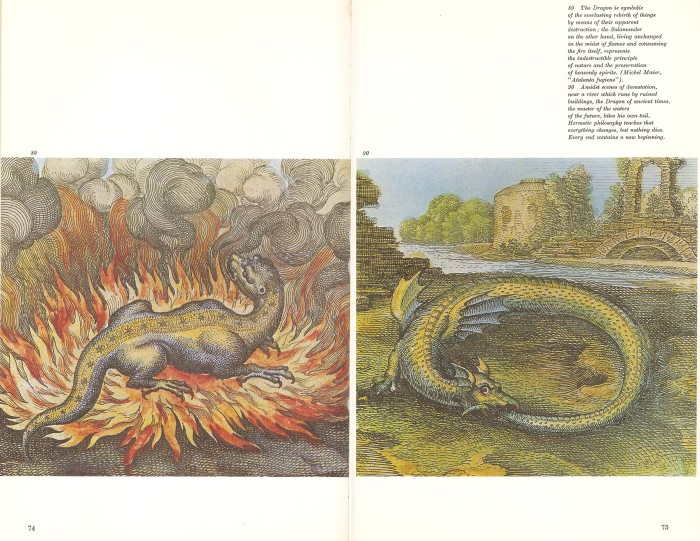 From Chapter 4, “The Sources of Alchemy,” two alchemical dragons

From Chapter 5, “The Twilight of the Traditional Sciences,” a magic lantern demonstrates the connection between magic and science

From Chapter 6, “The Future of Parascientific Knowledge,” old and new collide in the 1960s vogue for hallucinogens and scientific analysis of traditional magic

The vogue for illustrated mini-encyclopedias of world knowledge came into its own in the postwar period in the West. The spirit of New Frontier, space-age optimism led traditionally non-educational publishers into the educational field, usually by producing striking, lavishly-illustrated, glossy full-color gazetteers on particular areas of knowledge. The series of which this volume is a part, The New Illustrated Library of Science and Invention, covered all sorts of topics in the history of human invention: communication, transportation, and economics, among others. In its one departure from the hard sciences, the series covered the world of occult and magical knowledge in this History of Occult Sciences, written by amateur alchemy student René Alleau.

Alleau, an engineer and historian of alchemy and Freemasonry, had previously worked with founding Surrealist André Breton in the 1950s on the traditions of Western occultism, alchemy, and phenomena like automatic writing as they related to Surrealism. In the 1960s, as the paranormal and occult underground began bubbling into the mainstream (ushered in by Alleau’s countrymen Louis Pauwels and Jacques Bergier in their 1960 book The Morning of the Magicians), a series like The New Illustrated Library could afford to spend one volume looking at the world of the paranormal as part of the pageant of human invention.

The book itself presents some of the most striking visual depictions of the occult throughout human history, from Neolithic daubings, to tribal masks and weapons, to Western hermetica and alchemy, to 20th century scientific experiments in the paranormal. Alleau asserts that all these explorations of the unknown are components of an overarching tradition of human curiosity, simply another form of wisdom-seeking, an older form of science as it would be known to the educated contemporary reader. With 1967’s Summer of Love came a revolution in thought: a trend in publishing and popular thought that both extolled esoteric tradition as an alternate source of truth for the decadent, technocratic Cold War West, and popularized this hidden history in the form of attractive mass market publications.