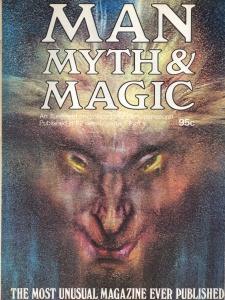 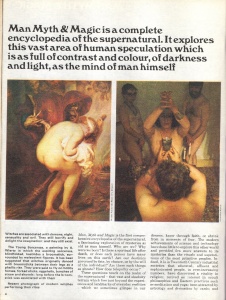 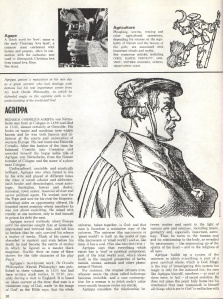 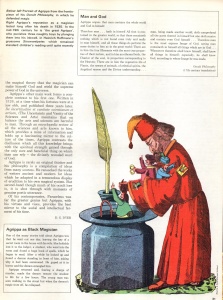 Man, Myth & Magic, dubbed “the most unusual magazine ever published,” was the first mass market encyclopedia of the occult, published in the U.K. and Australia in 112 issues beginning in 1970. A 24-volume hardcover set was released shortly thereafter, and the magazine debuted in the U.S. in 1974, heralded by a particularly memorable television commercial. Edited by occult historian Richard Cavendish (1930-2016) with contributions from an international cadre of academics, Man, Myth & Magic was hugely successful and spawned numerous copycat occult and paranormal encyclopedias well into the 1980s, when the Age of Aquarius gave way to the Satanic Panic.

A firm skeptic regarding occult beliefs at a time when objectivity and scholarship on the subject were scarce, Cavendish had written his first book, The Black Arts, in 1967. The “history of witchcraft, demonology, astrology, and other mystical practices throughout the ages” became a book club selection, and popularized occultism in both Britain and America. With Man, Myth & Magic, the esoteric became a middle-class hobby, as well as an enduring trope in mainstream popular culture. “It’s these odd corners of the human mind that I find fascinating,” Cavendish said in 1970. “What excites me… about all these subjects, is the marvelous poetry and insight on human nature…”

The cover of Part One features a “portrait of a demonic ‘elemental'” by British artist and occultist Austin Osman Spare, and articles inside cover the Aberdeen witches (1597) to the alleged demonic possession of a group of nuns in 1611 Aix-en-Provence.

8 thoughts on “‘Man, Myth & Magic: An Illustrated Encyclopedia of the Supernatural’, Part One, 1970”