Original caption from The Plain Truth, Feb.-Mar. 1955: “Now STUDY this picture. This is the fifth of the seven last plagues (Rev 16:10,11). Study the Bible description with this picture. In the first of these last plagues foul and evil sores will come on all who have the ‘mark of the Beast.’ In blasted cities burned even more by the fire sent by God from the sky, ulcer-infested people will seek food and relief.”

Born in 1909, Basil Wolverton was a successful American illustrator and cartoonist, admired within his industry and by its fans, yet little known to the general public. His drawings—the twisted shapes of spaghetti, meatballs, and mutation—may repel some, but they never fail to leave an impression, especially on the young. Wolverton was active between 1938 and 1974, and made a dent so deep that his style and influence were stamped into the underground comix scene of the ‘60s. Robert Crumb and Ed “Big Daddy” Roth were unmistakably influenced by Wolverton’s style, and both achieved a widespread popularity that he never did. In that way, his style grew beyond him. It became synonymous with wacky humor, rebelliousness, bad trips, paranoia, and the nervous side of the hippie utopian dream. Through the following decades and to this day, his weird energy propels the artists behind comics, video games, album covers, tattoos, and graffiti. The marriage of the goofy and the gross still inspires rebellious kids of all ages.

A self-taught master of pen and ink, the vibratory sizzle of Wolverton’s hatching fills his backgrounds, sometimes with gradually spaced straight lines, sometimes with radiating circular waves, at times recalling Pointillism and the layered swirls of Van Gogh. In his skies, pen strokes give phantom form to the invisible: bursts of emotion, waves of radiation, and the merciless will of the Almighty. Within his human figures, the visual code of dots, dashes, and scratches morphs seamlessly from the sacred to the profane, from beams of light and energy to dirt, hair, wrinkles, cuts, scars, acne, boils, and beads of sweat.

1946 saw Wolverton win a nationwide contest to draw “The Most Hideous Woman in Lower Slobbovia.” His “Funny Faces” series up to this point had been goofy, sometimes gooey, but rarely grotesque. Lena the Hyena was a new high in low entertainment—a character from Al Capp’s Li’l Abner deemed so ugly, her face could never be depicted. Naturally, the strip’s fans were frothing at the mouth to see just that. Out of thousands of entries, Wolverton’s rendering brooked no competition. Lena’s skin hangs flabbily from a horse-like skull, mouth open, long craggy teeth and gums jutting forward from her lips like a Venus flytrap. A nose like a flattened, bifurcated rubber hose droops over her upper lip. Unperturbed, her eyes gleam with insane glee from a shrubbery of brows that cap a blasted moonscape of a face littered with Cheerio-like acne craters. Certainly, by the standard of the day, Lena put him over the line of the grotesque, and she was a huge hit. Wolverton went on to draw the initial Ugly Stickers, a direct inspiration for the Garbage Pail Kids.

Moving from the clean-lined, square-jawed heroes of the Golden Age (like his own Spacehawk, Space Patrol, and Meteor Martin) into the dark demesne of horror comics in the early ‘50s, Wolverton’s affinity for twisted organic shapes found its true home. Many of his horror and sci-fi stories deal with body transference or distortion in some way. When human bodies aren’t being swapped for alien or monstrous ones, they’re being taken over or corrupted in ghastly ways. Though he aspired to the heavens, his short horror stories are instinctively creepy and visceral, sometimes deeply psychological, but always serving an underlying integrity and morality. When the subject is fear, there’s no hint of pretense. Wolverton guilelessly conveys the vulnerability, pain, and anxiety of simply being human.

As a young man working alone at his drawing board in Vancouver, Washington, Wolverton scanned the radio dial for background noise to accompany him. While drawing his first comic book in the late ’30s, he discovered Herbert W. Armstrong’s Radio Church of God, later to rename itself the Worldwide Church of God. Wolverton entered into a pen pal relationship with the radio preacher, and, before two years had passed, the agnostic became a true believer. Armstrong was so impressed by the young man’s drive and dedication that he soon made Wolverton an elder in the church.

Herbert Armstrong was a singular person in his own right, rejected by more conventional thinking Christians. Armstrong believed himself to be a prophet of God, but had no formal religious training. While this is not at all unusual in the annals of American religious leaders—i.e. Joseph Smith, Edgar Cayce, Ellen Gould White—Armstrong’s divergent set of beliefs included Anglo-Isrealism, which is the widely refuted and racially motivated idea that those of Western European descent are a “lost tribe” of Israel, God’s chosen people (and by extension, that Jews are the descendants of Satan). Along with this went an adherence to a Saturday Sabbath and Old Testament dietary rules. Armstrong rejected the Trinity, and believed that man could ascend to actually become God; indeed, that it was God’s purpose for man. Most of all, he believed in a literal and imminent apocalypse looming over the people of Britain and America.

In the early ‘50s, Armstrong commissioned Wolverton to create his first set of Biblical images: the prophecies from the Book of Revelation. “God supplied the man for the job,” Armstrong wrote of Wolverton, “—a man equipped by natural talent, training, experience, and profession for this all-important mission.” The twenty or so illustrations that resulted are some of Wolverton’s finest. Certainly they are his most striking, some of them deemed too disturbing for publication. First appearing in consecutive 1954-1955 issues of Armstrong’s Plain Truth magazine (October, November-December, January, and February-March), seven of the Biblical plagues and curses are shown as the plausible, nightmarish results of atomic and/or chemical and biological warfare. “Yes, I know these pictures are terrifying!” Armstrong writes, “… but they may save thousands of precious lives—including yours!”

Original caption from The Plain Truth, October, 1954: “The only warning of the hydrogen and cobalt bombs will be a blinding flash. Buildings, cars, people – everything – will be abruptly vaporized! Atomic warfare will climax the present round of wars and rumors of wars (Rev. 6:3-4) and suddenly bring about the prophesied ‘Great Tribulation’ (Rev. 6:9-11)”

A ghostly mushroom cloud dominates the black sky over a cityscape, the embodiment of the fiery red horse of Revelation. It is the moment before the nuclear shockwave annihilates the fearful masses. Cars and bodies float on the leading edge of the wave, and every eye is wide and white with terror.

Original caption from The Plain Truth, Oct. 1954: “One mighty hydrogen bomb will suddenly turn a teeming metropolis into a vast, poisonous crater. Amid the outer wreckage, will be found tens of thousands of mutilated bodies–too far away to be vaporized, too near to live! This horrible devastation NOW BEING PLANNED is the climax of the second seal and introduces the fifth seal–The Great Tribulation (Rev. 6:3-4: 9-11)”

The pale horse is a flight of sleek, futuristic aircraft arrowing into a seemingly bottomless bomb crater. Blasted corpses and rubble litter the foreground. 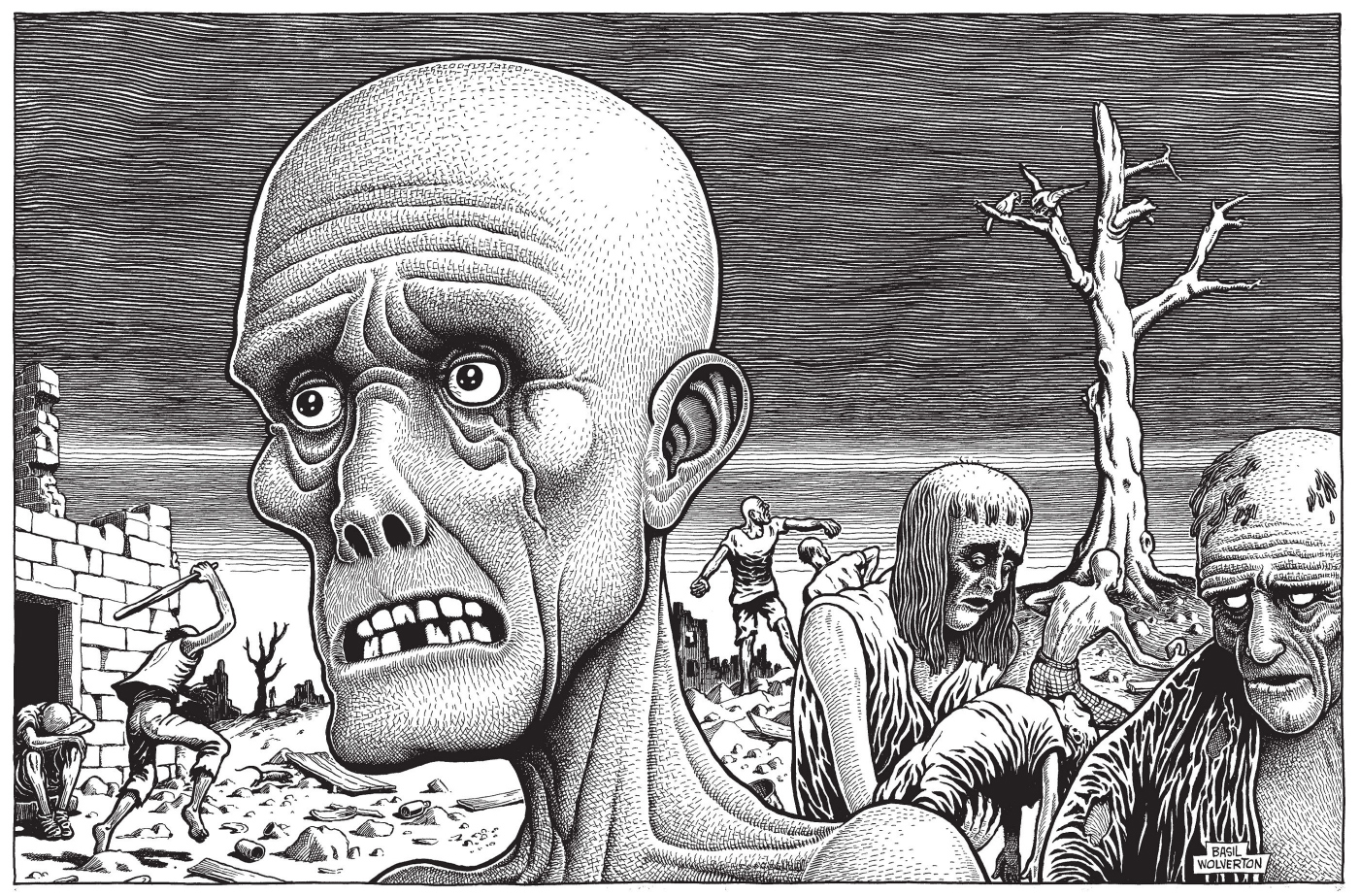 Original caption from The Plain Truth, Oct. 1954: “Look at these pathetic faces! Famines and epidemics, next to sweep the earth (Rev. 6:5-8), will grow rapidly worse following atomic warfare. Bombings will render vast areas incapable of food production. With no transportation systems, hordes of people will have little or nothing to eat. Even rats will be prize catches. Some wretched souls will even turn to cannibalism!”

The black horse takes the form of famine among the survivors of the nuclear blast. Its emaciated victims resemble nothing so much as George Romero’s living dead. That resemblance is even more direct in a later image, which shows the enemies of Israel stricken by a plague that rots their flesh, an irradiated death wind shimmering through their broken bodies.

Original caption from The Plain Truth, Nov.-Dec. 1954: ” “And I beheld…the sixth seal, and lo, there was a GREAT EARTHQUAKE… and the stars of heaven fell unto the earth.” This comes on the heels of World War III as God ‘shortens’ those days to prevent the annihilation of human life by the mass-destruction of man by man.”

In another chillingly prescient image, airplanes drop from the skies (a frequent image in Rapture media starting in the 1970s) and crash into skyscrapers amidst a meteor shower and an eclipse.

According to his son Monte, this image of post-apocalyptic mutants was one of Wolverton’s personal favorites.

The final image in the series, named by Wolverton as one of his favorites and rejected as too graphic by Armstrong, depicts horribly misshapen mutants stumbling through a barely recognizable cityscape—the dying remnants of humanity.

The Apocalypse illustrations were created at the peak of his abilities. It would be easy to think, given their power, that he was submerged completely in the influence of Armstrong and the Worldwide Church of God. The reality is that Wolverton was busy at work creating entirely secular art while at the same time giving new life to the end times. This included some of his best known work for MAD magazine, as well as horror stories for comics like Weird Chills and Weird Tales of the Future. Despite pressure from Armstrong to become more involved with the church and relocate to California, Wolverton stayed in Vancouver. The comics publishing world was also vying for his time, and pushing for him to relocate to New York City. He resisted both of these influences, physically and spiritually. He remained, in a very important sense, unspoiled. Ultimately, the power of these images can’t be attributed to mere fanaticism. By all accounts, Christianity as Wolverton practiced it was largely humanistic, and moderate drinking, dancing, music, and entertaining were all a part of his life. It’s not apparent to what degree Wolverton embraced the racist ideology connected with Anglo-Isrealism. He never publicly denounced it.

What remains is the power of an artist who understood and shared the human fears of his time, and just happened to have a unique gift for depicting the unsettling. The father of the Ugly Sticker and Lena the Hyena was, in fact, a well-adjusted man who lived a balanced life and was at peace with his talent. That balance is partly what allowed him to unleash images of hell on earth powerful enough to win converts. Wolverton’s knack for the disturbing made editors and clients throughout his career reject some of his work as too extreme. His stark, instantly legible compositions contain within their larger shapes the vibrating paranoia and nasty little details of Cold War nightmares.

If humanity does manage to annihilate itself with weapons of mass destruction, whether it’s the result of God’s will or pure human folly, Wolverton’s graphic, modern interpretation of the Biblical Apocalypse could adorn a tombstone for our species—a prophetic message of our final hours that transcends written language.

All of Wolverton’s illustrations for the Worldwide Church of God, including 20 for the Book of Revelation and over 550 depicting scenes from the Old Testament, are collected in The Wolverton Bible, published by Fantagraphics and edited by Wolverton’s son, Monte Wolverton.

Greg Rozeboom did his first illegal downloading in the mid-’80s, over a 300 baud modem. He’s an image addict, Blu-ray collector, and his interior decorating philosophy is that more is more.