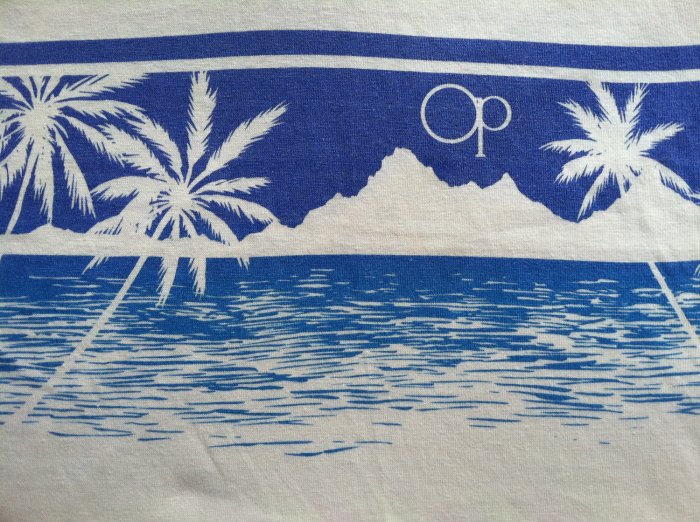 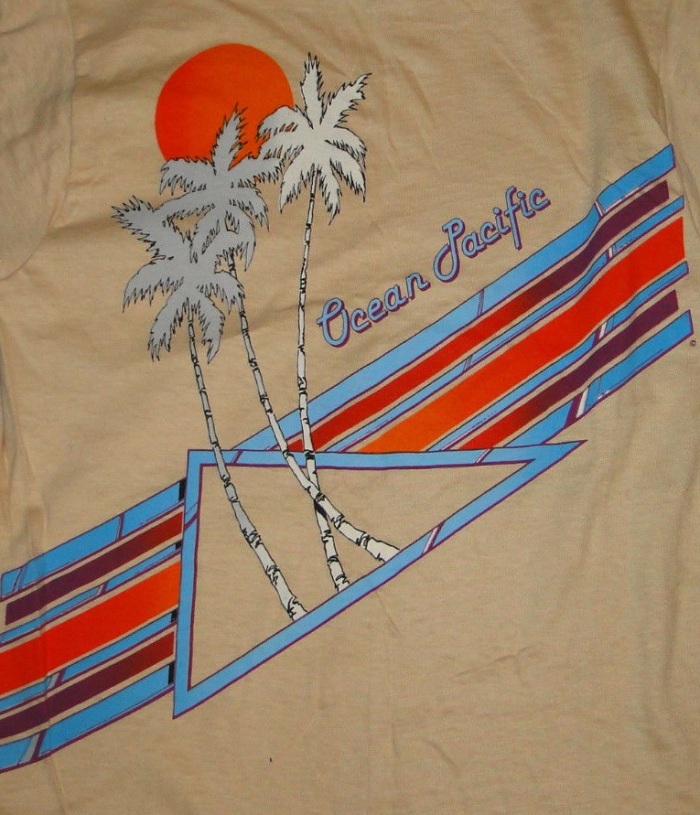 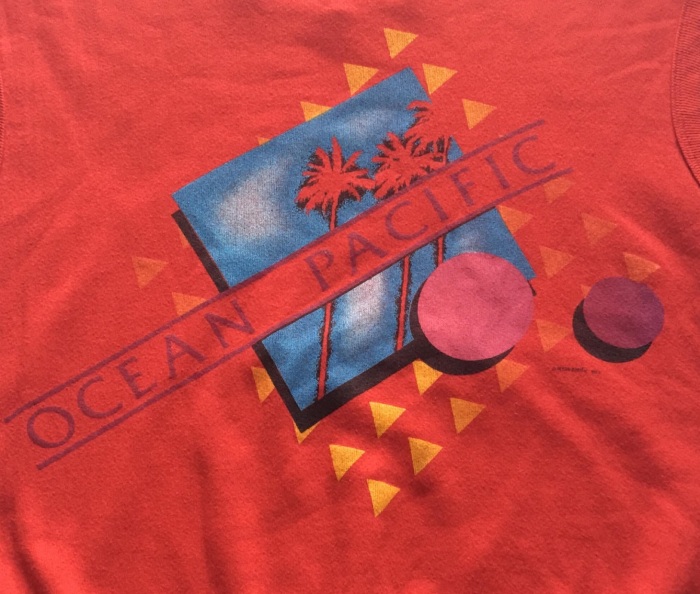 Ocean Pacific was founded in 1972 by Jim Jenks, a San Diego-based surfboard maker and former sportswear rep. He had developed the logo in 1969 for a surfboard line, but found much greater success with surfwear, OP’s corduroy “walkshorts” becoming an immediate hit with surfers and, in short order, boys and men everywhere (the high-waisted style was popularized by Tom Selleck in Magnum, P.I.). Edgier brands like Australia’s Quicksilver and Billabong (both established in 1973) quickly pushed OP out of the forefront among the local set, but Jencks had already rebranded OP as a more general sportswear line. While Quicksilver and others were at the time restricted to independent surf shops, OP was prominent in national department store chains, and included lines for both adults and juniors.

OP’s graphic apparel from the brand’s heyday dramatically illustrates the shifting visual aesthetic of the era, from the earth tones and primary color stripes of the late ’70s to the bright neon and jittery geometric shapes of the ’80s. The change is reflective of both the second surfing boom (several more brands, including Gotcha and Maui and Sons, made waves) and the commercialization of a previously esoteric pursuit—which, of course, had been invented by the Polynesians long before European colonization and the arrival of wealthy Americans at Waikiki in the early 20th Century. During the ’80s, image and wealth dominated: one’s association with a given subculture, no matter how “underground,” came to depend less on participation in that subculture and more on one’s ability to pay for merchandise that advertised one’s desire to be identified with that subculture. Skateboarding and punk were the victims of the same process of cannibalization, whereby corporations gobbled up jealously communal rites and spit them out as global commodities.

A commercial from 1984 shows Ocean Pacific chasing a more upscale demographic, with yet another outburst of distinctly ’80s design elements, including the pervasive checkerboard (proven to attract young men). Here a clean-cut, attractive teenage couple drive a red convertible through a magical purple and pink landscape, propelled by a bouncy synth score. Glimpsing an OP billboard on the side of the road, they discover, to their great shock and gratification, that it features the two of them—driving through a magical purple and pink landscape. The spot is deeply innocent and yet deeply vain, an apt description of the decade in which it ran.

OP made attempts to recapture the surfing crowd, namely by sponsoring the OP Pro Surfing Championship from 1982 to 1995, but it survived on the more conservative fare—shorts, polos, Velcro wallets—that became widespread among suburban American adolescents, many of whom lived nowhere near a beach. In 1986, total surfwear sales hit $1 billion for the first time, and the following year saw Ocean Pacific’s profits peak at $370 million.