By the summer of 1976, I was a child steeped in animal terror. Well, steeped in loads of types of terror, really, seeing as I lived in mortal fear of UFOs, bigfoot, ghosts with tricorn hats, the Wirrn, Teddy Boys, the witches that lived near my nana’s house, fire, escalators, electrical substations… Animals, though, had a particular hold on my nerves because the bastards were everywhere: seemingly on a daily basis hedgehogs would claw my face, bats would entangle themselves in my hair, enraged livestock would charge at me as I made my way across a field. Oddly, for someone who’d grown up on a small farm in the Welsh wastes, my poor mum was terrified of animals too. When we’d been to the circus that spring, the spotlight had picked her out to participate, and, being a grim adherent of the British school of thought that prefers self-immolation to “making a fuss,” she’d agreed, despite her obvious misgivings. Her subsequent terrified reaction to being strapped into a trapeze harness and raced around the ring at high speed on the back of a particularly frenzied horse had disturbed me so much that the ringmaster had been forced to give me a (as we later discovered) highly flammable knock-off Womble to calm me down.

Some weeks afterwards, I was marched out of school and lined up in the playground with the other infants to watch a demonstration about police dogs. Unfortunately, police, teachers, and family had all neglected to inform me that the protagonist of this staged event would be my dad, something I only learned when I saw him climbing surreptitiously out of a window carrying a silver cup and attempting to flee across a field, only to be brought down by a savage police Alsatian named Alan. Furthermore, thanks to a strange and inherited talent for pissing off previously amiable dogs, I’d been bitten by practically every one of them I’d ever encountered, and despite multiple tetanus shots my fears weren’t helped by the country’s growing hysterical conviction that it was at risk of a continental contagion that could have all Brits foaming at the mouth (as it turns out, a Europe-related foaming would eventually infect the UK, but in a very different form). I, along with the rest of the country, had even come under attack from ladybirds, for fuck’s sake.

But even though my family, and especially me, seemed to attract the animosity of anything with feathers or fur, there was one animal that I knew was on my side. One animal that I was certain would never hurt me—well, apart from that time at Huddersfield market when three of them had jumped on my pram and started pulling my hair. That unpleasant incident aside, however, I was confident that monkeys were my friends.

Like many children in the UK at the time, I was absolutely in thrall to Planet of the Apes, which, in its TV show and comic form, seemed almost to have taken on the form of a religion for us. Monkey paraphernalia proliferated and, like many of my peers, I had a plastic monkey mask that I wore at every opportunity, somehow intuiting that simulated chimpdom freed me from the decaying imperatives of my humanity. This, then, was my frame of mind when I went to see the Planet of the Apes Live Arena Show. 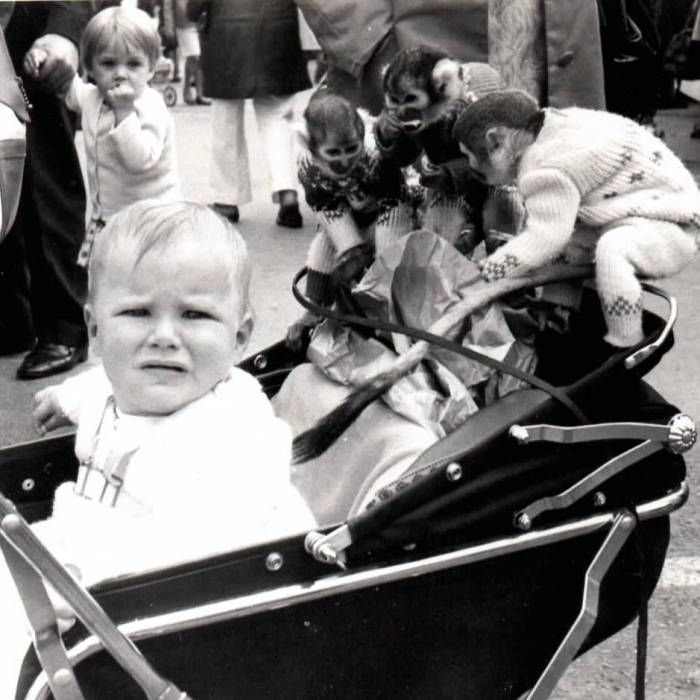 The author under simian attack

The author in ape mode

The Planet of the Apes Live Arena Show was an initiative of British company Television Character Promotions (TVC), which, thanks to deals it had made with Twentieth Century Fox and Marvel comics, organized ape interventions across the UK from 1975 to 1978 as well as running the official British Planet of the Apes Fan Club. The fan club—based for much of its existence at the memorably recursive address of Ilford Lane Chambers, Ilford Lane, Ilford—put out an endearingly ramshackle newsletter packed with ape news, competitions, readers’ letters that concluded with salutations like “Yours Apefully,” and instructions for glueing dangerous home-made ape prosthetics onto your face. TVC offered three types of live ape events: personal appearances, mainly at supermarkets; theatre shows, where the cast would mime along to a prerecorded script; and—most thrilling of all—the “live arena shows,” featuring horses, stunts, and guns. It was at one of these live shows in 1976 that I was thrown headlong into another reality and my membership in the human race called into question.

My memories of the event itself have eroded in the acid bath of the intervening 43 years, and even the location remains a mystery. It was certainly one of those scrappy, neglected bits of wasteland that seemed to constitute about 80% of the Britain of the mid ’70s: perhaps Brampton Raceway outside Sheffield where we used to go to watch banger racing. I do, though, vividly remember that it felt like falling into Zardoz. The show began with the unexpected appearance of some “astronauts,” together with Galen and Dr. Zaius, from behind a tussock. Our joy at seeing them soon evaporated when a group of figures on horseback and brandishing rifles appeared in pursuit. I realized in that moment that I had been mistaken to assume that the narrative center of the Planet of the Apes Live Arena Show would be the kindly chimpanzees and the thoughtful orangutans. A Live Arena Show needs action and dynamics—it needs conflict—and so the real protagonists turned out to be militaristic, powerful, confident, aggressive (and clad in fucking amazing clothes): the gorillas. 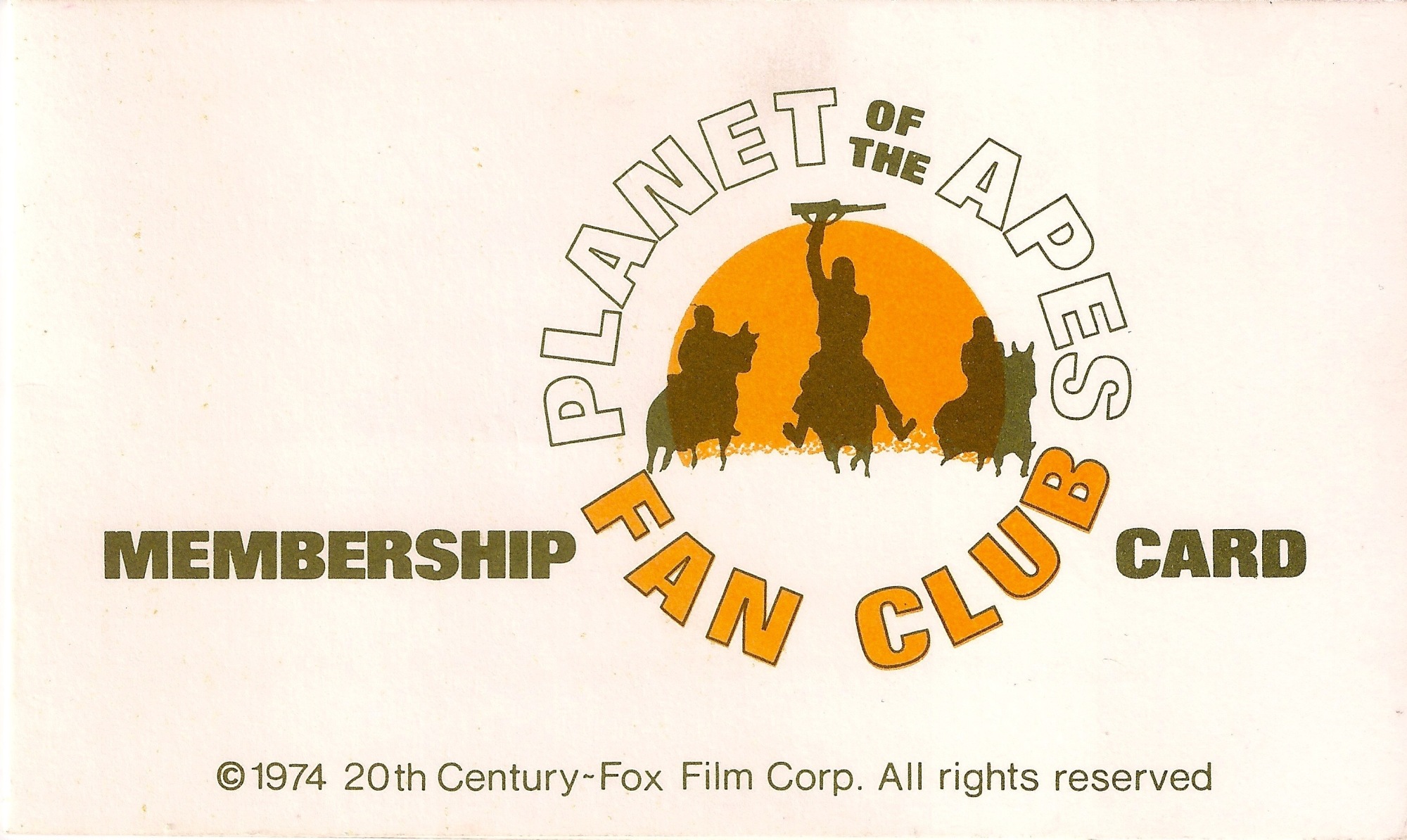 As we watched, completely awestruck, I noticed how expressive the ape’s faces were, how accurate the costumes seemed to be, and how savagely they rode through the crowds. A doubt began to germinate in my mind: what if this wasn’t just a show? What if those really were gorilla militiamen and the whole “show” thing was simply a fiendish simian ruse to entice us into paying—of all the humiliations—to be traipsed off to our dooms? My fears began to grow when I noticed the reactions of the adults around me. My parents and me had gone with a friend of theirs, Derek, and his kids: Derek was a fitter in a factory in Barnsley, a man as far as I was aware physiologically incapable of being impressed by anything that could not be attached to a Kawasaki 250. Worryingly, even he had started looking uneasy as the gorillas on horseback began lassoing humans and rounding up gangs of children.

Soon enough, the militia came for me and Derek’s kids too, and as the cracks of rifle shots echoed through the air, we were herded off along with the rest of the young captives by whip-cracking gorillas and ordered to move like monkeys. We obeyed instantly, loping after our captors, our loyalty to the human race melting away like an ice cream under a sunlamp.  Well, you know what they say: “Human see, human do.” Many of us were already wearing our monkey masks, and we seemed almost relieved to shed the pretense of humanity we’d been affecting and join the ranks of the simians, almost as if that was what we had actually been waiting for—the gorillas, our liberators and not our captors, leading us to a new, hairier world. I looked back at our parents through the eye slits in my mask: they were watching us with amused confusion, uncertain as to whether this was actually the primate abduction that it increasingly resembled.

And apart from shaking hands with Zaius, loping off towards my future as an ape is the only other thing I remember. I’ve no memory at all of rejoining the human race, only of sitting in the car on the way home, monkey mask still in place, while ambivalent emotions played out inside me, prime among which was perhaps a feeling of vague disappointment. I can’t quite say why the Planet of the Apes Arena Live Show had such a profound effect on me, but perhaps it was because it did the same thing good theater can do: it broke down my preconceptions about reality and introduced, in a physical form, a wild, impressionistic new hypothesis.

So what exactly was the Planet of the Apes Arena Live Show? Just an attempt to cash in on a stupid kids’ fad? To some extent it was certainly that, though it was seemingly an attempt made in good faith and with a sincere desire to produce something that in its way was worthwhile and memorable. But from another perspective, would it be too much of a stretch to look at it as an intensely vital piece of performance art that transplanted the surrealism implicit in the concept of Planet of the Apes onto the odd arenas of the real world—its racetracks, parks, and stock-car circuits—to create a bizarre, shambolic tableaux of cross-species strangeness that was both deeply disturbing and profoundly liberating? I’m not trying to suggest that everyone who saw the Planet of the Apes Arena Live Show automatically grew up to be a reality-questioning anarcho-dadaist, but I am pretty sure that for at least some of us who attended, the experience provided a shock that helped disrupt our internalized spectacle for good.