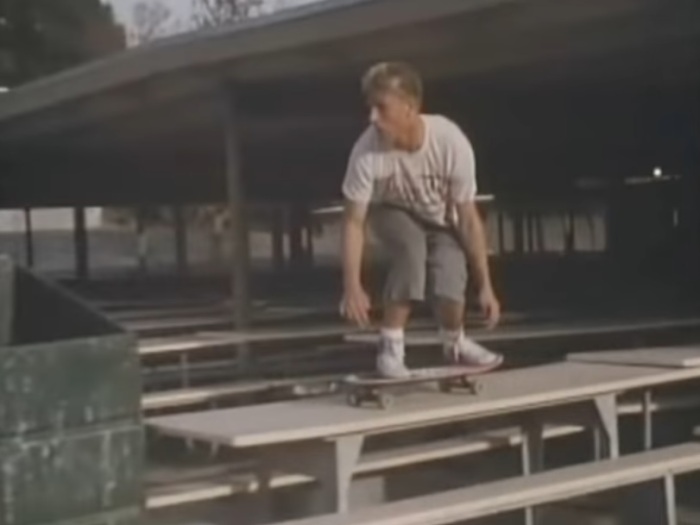 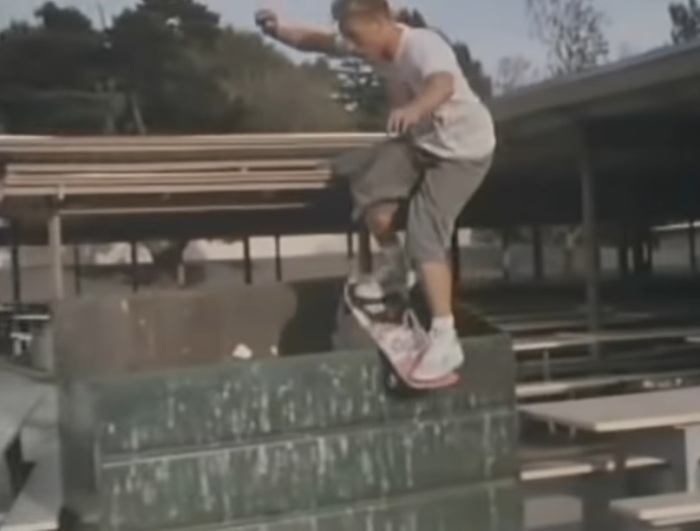 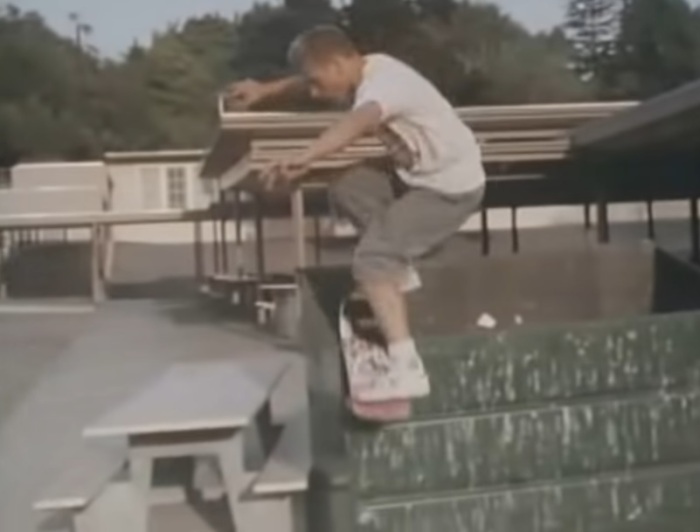 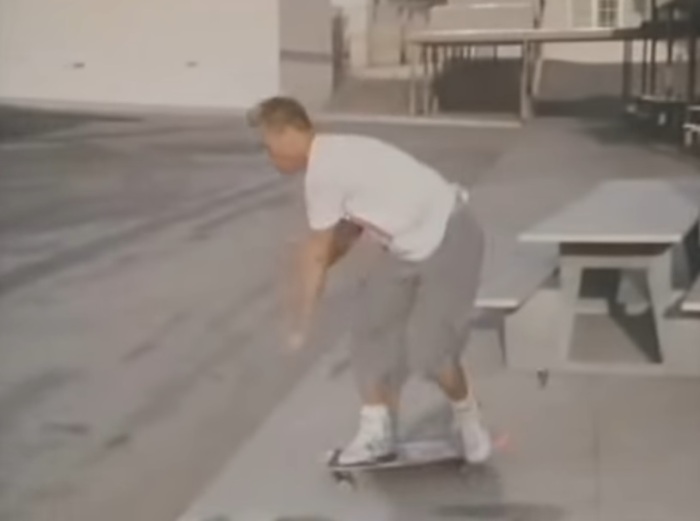 In 1985, right around the time one Marty McFly made a “board with wheels” out of a 1955 scooter to escape Biff and his goons, the skateboarding industry exploded. Up to then, the unruly and ruleless sport had been dominated by vert skating (pools, half-pipes) and, to a lesser extent, freestyle, where skaters did lots of technical, stationary tricks across a relatively small surface area (freestyler Per Werlinder doubled for Michael J. Fox in Back to the Future‘s more difficult skating scenes). Now, though, as the kids who didn’t have easy access to ramps and far-flung skate parks got interested, “street” skating rapidly developed. Santa Cruz Skateboards’ Wheels of Fire was its Big Bang.

Sold by mail order and in skate shops, Wheels of Fire (watch it here) followed the mold of previous direct-to-VHS skate videos, especially 1984’s Bones Brigade Video Show, where featured skaters are showcased doing vert, downhill, freestyle, and street, with a side of clowning and lame humor. The difference between past and present was South Santa Monica teenager Natas Kaupas. Lots of street tricks had already been established—ollies, grinds, wheel slides, hand grabs, hand plants, rail slides—most of them emulating what was happening in vert. When Natas shows up in Wheels of Fire‘s third part, however, it’s clear that evolution is at hand. Where other skaters were ollieing over curbs, Natas was ollieing over 32-gallon trash cans. Where other skaters were throwing their boards on walls and riding them down, Natas was carving up and down walls without any hands. While other skaters were railsliding on parking blocks, Natas was railsliding on the razor’s edge of Venice High’s dumpster. He didn’t even know what some of the tricks were called until he met up with other skaters who were less isolated and less introverted, notably friend and fellow skater Mark “Gonz” Gonzales, equally talented and equally important in the development of street.

This mere five minute segment—watched and rewatched in every skate shop across the country—irrevocably changed the course of skateboarding. It was a milestone, like the Z-Boys winning Del Mar in 1975 or the California drought of 1976-1977, when skaters first discovered the magic of empty swimming pools. Although other skaters (Gonz, Mike Vallely, Tommy Guerrero) were pulling some of the same tricks at the same time, Natas had a speed and a fluidity that hadn’t been seen before, at least not by the wider skateboarding community. His style was attributed to the influence of surfing, a Dogtown way of life, but Natas claimed it was the other way around. Indifferent to vert, he just kept moving, as fast as he could, attacking every approachable angle in his neighborhood. “I attempt to make everything skateable,” he told Thrasher magazine in May 1988, “walls, curbs, ramps, whatever.” He had appeared in Thrasher several times at that point—debuting on the cover of the September 1984 issue—but this was his first interview. After Wheels of Fire, he was famous to everyone who stood on a board, and so was street skating.

There are hundreds, maybe thousands of ways to maneuver a skateboard over, onto, against, or across any given piece of terrain or architecture. That’s what makes skateboarding so unique. Even surfing, skating’s spiritual ancestor, is limited by the paradigm (sublime though it may be) of the wave. With Natas, skating took on the aspect of ferocious, yet balletic, performance art; what had been dismissed before as boundary or obstacle became blank canvas, the stuff of new tricks, the means of progression. Natas, Gonz, and their peers destroyed freestyle, which was philosophically at odds with the perpetual motion and urban immersion of street skating, and vert became increasingly rare as excitement shifted to the more expansive, more democratic new movement. (Rodney Mullen, the freestyle genius who invented most of the foundational tricks used in modern street, lost all his sponsorships and faced the end of his career; inspired by Natas and Gonz, he very quickly elevated street skating to what became, unmistakably, a new art form.)

Wheels of Fire also marks the beginning of the skateboarding video as a genre, a DIY document of a DIY subculture that defined itself by rejecting and subverting authority and property (inevitably, there is a scene where a cop or cops “hassle” skaters, and vice versa), by rejecting cutthroat competition in favor of communal “sessioning,” and by creatively assimilating and manipulating the material environment that makes skating possible in the first place. It is also, despite some nasty exceptions that prove the rule, one of the more inclusive communities in the world: all you have to do to be a skater is get up when you fall down, and try again. Hundreds of skateboarding videos followed Wheels of Fire and the same year’s landmark The Search for Animal Chin (once again featuring Powell Peralta’s Bones Brigade), the most influential being 1991’s Video Days, directed by then 23-year-old Spike Jonze. The soundtracks, an eclectic mix of punk, indie, soul, jazz, oldies, and hip-hop, became embedded in the culture. The intro to Wheels of Fire features a song by skater Claus Grabke’s band Eight Dayz called “What’s So Strange About Me?“—something of a lost classic.

Natas went on to appear in the sequel to Wheels of Fire, 1989’s Streets on Fire, where he one-ups his previous performance at every turn, infamously doing a 520° spin on the tip top of a fire hydrant. It’s just not possible. Until it is.