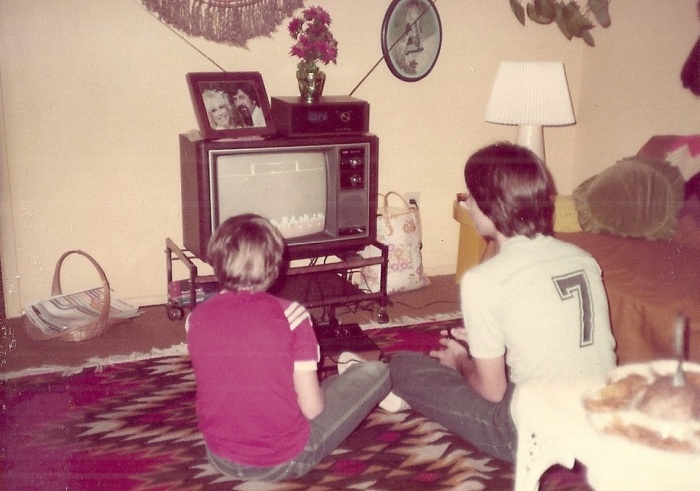 ONTV was a “subscription television” service that would “unscramble” UHF channels in participating markets, including Los Angeles County, where I grew up. If you’re not sure what it means to unscramble a channel, let me tell you. Before cable TV and VCRs became commonplace, our viewing choices were limited to a handful of channels (including the “Big Three“) broadcast on VHF (very high frequency), and several UHF (ultra high frequency) channels that included PBS, other independents, and network affiliates. ONTV’s signal was broadcast in UHF, but it was intentionally scrambled, meaning audiences could hear everything (including porn, which ONTV offered for an additional charge), and kind of make out what was going on, and kind of clean up the picture a bit by fiddling with the UHF tuner—but really it was a miserable, humiliating experience. Which was made worse when occasionally these subscription services (there were a few) would unscramble “coming attractions” segments and the like, just so that you would know exactly what you were missing. That beautiful box (and I mean that literally) cleaned everything up.

We didn’t have a VCR yet, and ONTV was our first foray into pay TV. The only ad I could find (circa 1980) has the monthly cost at $19.95, and I am highly dubious that my parents would ever have paid that. There must have been some sort of special deal by the time we made the leap, probably late 1981. We didn’t have it all that long; when the prices dropped (early 1983?), my dad caved and we got a VCR. Whatever the case, for a short time we became sort of famous in our suburban neighborhood. You see, George Lucas gave ONTV permission to broadcast a little movie called Star Wars on television—for the very first time. It was one of the first pay-per-view movie events in the US, and the cost was $7 or $8, depending on your location. Star Wars had been released for rental on Beta and VHS just a few months earlier, in May 1982. As I said, though, we didn’t have a VCR, and nobody we knew had a VCR. So, on Saturday night, September 25th, a few of my friends and some of their families (who I’m guessing pitched in) came to our place, popcorn was popped, and we watched the spectacle on what could not have been bigger than a 19″ set (hey, at least it was color). The experience was, to put it mildly, sublime.

The only other memory I have of ONTV programming is painfully craning my head under the railing of the stairs to see what my parents were watching after I was supposed to be in bed, only to catch a few minutes of Brian De Palma’s Blow Out (yawn). The logo and graphics of the various title sequences and promos and breaks captivated me, and still do. The entire visual marketing campaign, from beginning to end, was immaculate: lively, colorful, sharp, and in my opinion way cooler than what HBO was doing at the same time. Even the “Please Stand By” screen was mesmerizing. Watching those animated titles unfold and shimmer on that living room screen promised something I had been preparing for since the summer of 1977, when I first saw Star Wars and first played Atari: a neon- and chrome-enhanced future of thrills and opportunities that my terrestrial reality, with its roaming bullies and math tests and gas lines, could not reach.