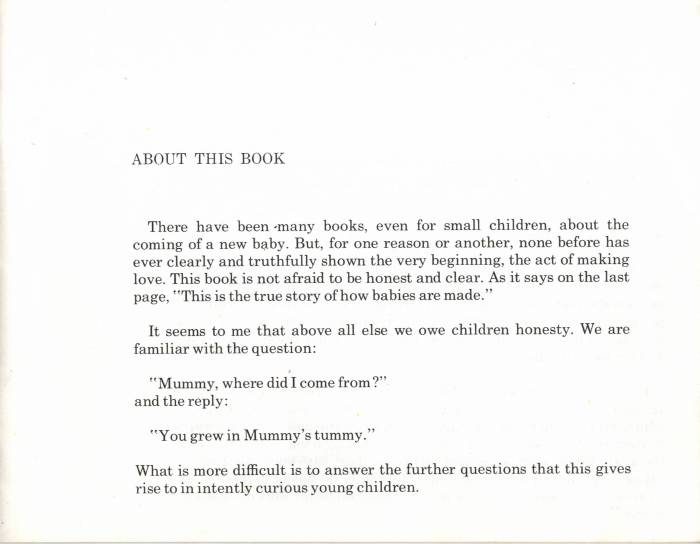 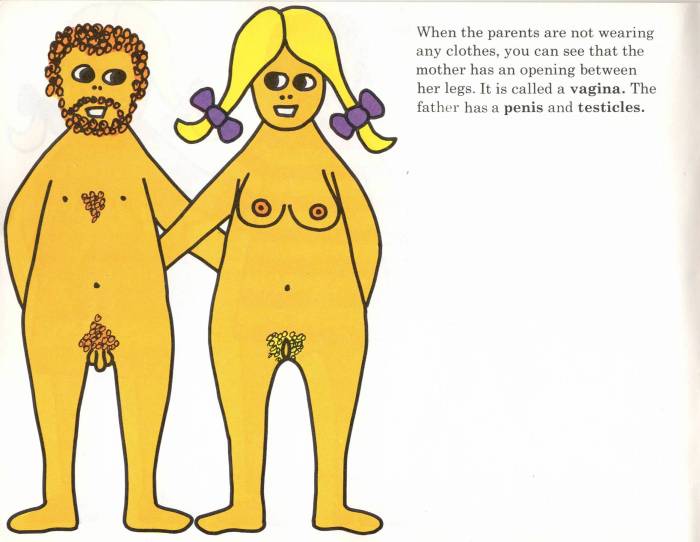 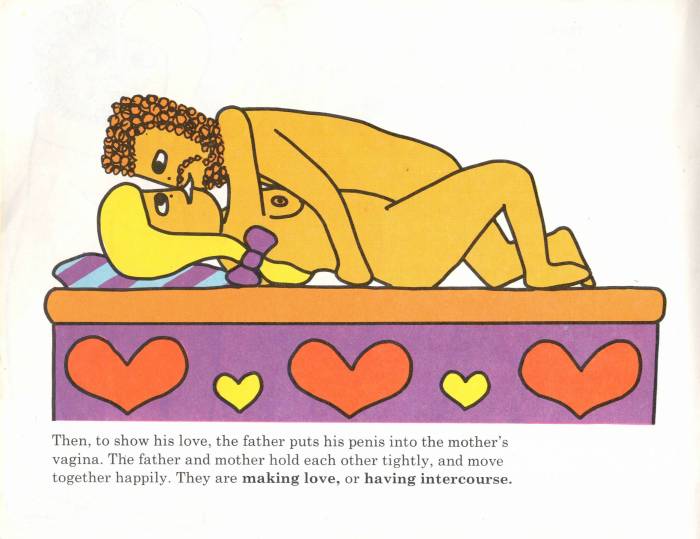 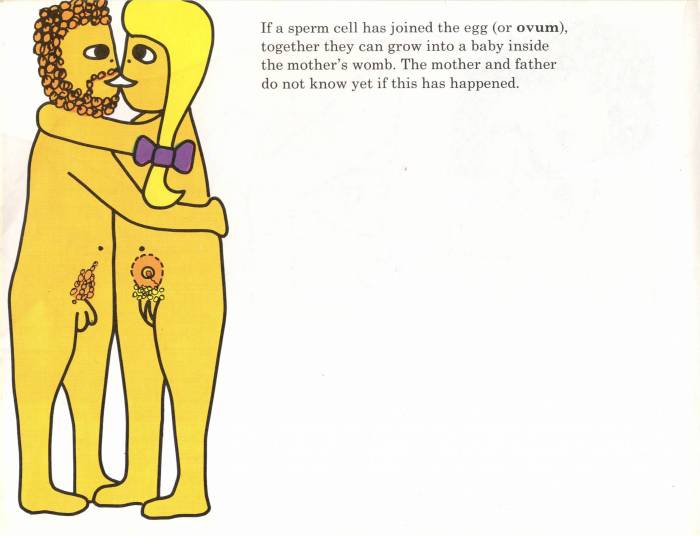 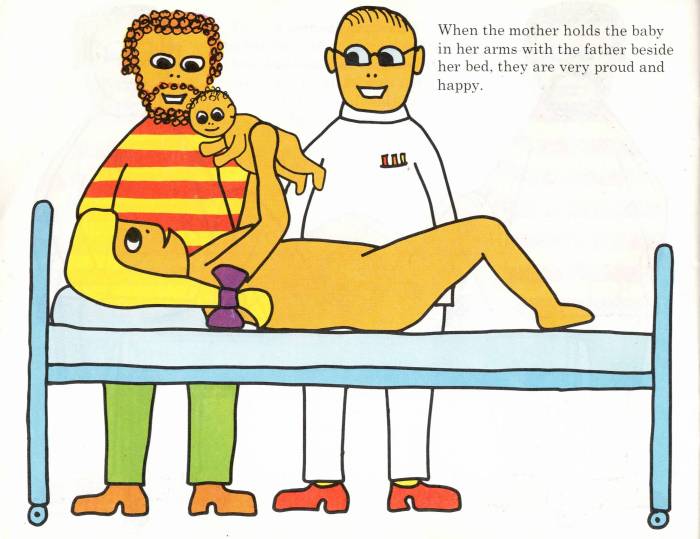 In 1973, construction toy Lego was joined on the shelves of British shops by another Danish product aimed at children—one which could hardly have been any more different in its aims, though which perhaps shared some of its underlying philosophy. How a Baby Is Made was the English language translation of Danish psychotherapist and “sexologist” Per Holm Knudsen’s children’s picture book Sådan får man et barn, published in Denmark in 1971. After winning the Danish Ministry of Culture’s children book prize in 1972, the rights were acquired in Britain where Piccolo Books, the children’s division of paperback publisher Pan, published it the following year. Using illustrations as gauche as they were explicit, and simple, straightforward text, How a Baby Is Made described exactly—and, given the age range of its intended readership, with remarkable thoroughness—what its title announced it intended to.

The book’s publication took place in the context of a UK that was trying to persuade itself it could be a low-rent version of its more urbane Scandinavian neighbors across the North Sea: we envied the “Scandis” their cool furniture, bold patterns, saunas, Abba, Volvos, Scania truck cabs, and laid-back approach to nakedness. Where we had drizzle, they had endless spring; and where we had seedy knee-tremblers in grotty bedsits, they had carefree sex under mulberry bushes or something equally healthy-seeming. How a Baby Is Made fell under the umbrella of this Scandiphilia, and its appearance also provided me with a a fleeting moment of junior school infamy. Both my parents were teachers, so the copy I was given in 1978 had presumably been passed on to them by some book company rep doing the rounds: given contemporary photographs of me, it seems unlikely that anyone would have splashed out hard cash on the possibility of me ever being in a position where I needed to know about conception. After studying How a Baby Is Made in my bedroom and learning with amazement about the mysteries of the human reproductive process, I guilelessly packed it in my satchel to show my friends at playtime the next day.

My classmates were intrigued, even though, as my friend Tracy pointed out, none of the mechanics on show made much sense and the book begged more questions than it answered—she said that she would be asking her older sister, the worldly Debbie, for further explanation that evening. Word spread among the mothers waiting at the school gates that someone had been flashing a “mucky book” around the playground, and the next morning several parents came in to see our teacher—the wonderful Mrs. White—to remind her that this was Doncaster, not Denmark, and to demand that any further ad hoc sex education be nipped in the bud. Mrs. White very tactfully told me that it would probably be better if in future I left How a Baby Is Made at home, and at hometime, I—now an accidental progressive-cum-sleazemonger—was subject to several stern glares and pitying looks from the parents waiting at the gates.

Unfortunately, though, the glimmer of kudos my time as a purveyor of filth had earned me from my peers faded rapidly, and How a Baby Is Made was soon forgotten. Forgotten but not gone, however: the book has continued to rear its strange head over the decades, though so saturated are we in postmodern irony these days that it’s almost impossible to mention it as anything other than a fucked-up freakshow of typical 1970s inappropriateness. And in fairness, it sort of is a fucked-up freakshow of typically 1970s inappropriateness; its blythe candor was pretty disconcerting, at least for this buttoned-up Brit. Beneath the patina of disconcerting oddness, though, there is something genuinely admirable: the intention to free children of their ignorance and fear and inform them in the least melodramatic, most straightforward way possible about something that parents down the ages have struggled, or totally neglected, to communicate: “We owe children honesty,” the book’s introduction says, and How a Baby Is Made takes it as read that children are capable of understanding the world around them if it is explained to them in a way that they can understand and without the filters of adult prudishness—and it presumes moreover that children have a right to know this stuff, however uncomfortable that might make adults still clinging to their schmaltzy Victorian ideas about childhood.

As fellow mutant Amy points out, by today’s standards How a Baby Is Made might appear a little reductive and essentialist in the way it conflates the act of reproduction with ideas about what should constitute a family, something that a modern version would need to take into account, but despite that, we agree there is something genuinely commendable about what it attempts to do and the way that it goes about it.

Quite a few of my schoolmates later ended up having unplanned kids when they were still very young, forcing them to abandon their educations and in some cases making their subsequent lives very difficult. While I’m not saying that youthful exposure to Sådan får man et barn would necessarily have changed that, growing up in an environment where open, honest discussion of sex, family planning, and pregnancy was a normal part of life certainly would have. It’s a mistake to fetishize other cultures and societies the way we Brits have a habit of doing, but a culture or society that attempts to reduce the amount of misinformation and misdirection all its children are fed about such basic human functions as reproduction (and birth control) is one we should already be living in.