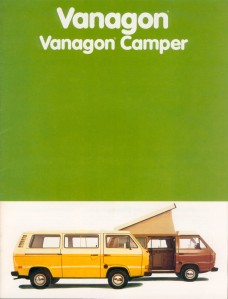 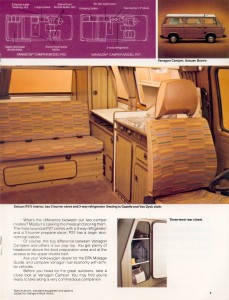 When the hippies grew up and had kids of their own, they needed something modern and self-contained to bring everyone back (occasionally this time around) to nature. Hence, the Vanagon. The second generation (T2) of the Volkswagen Bus, produced between ’67 and ’79, had gone over big with the festival- and protest-hopping counterculture because “It was cheap to maintain, easy to work on, and big enough to live in.” So, from a marketing perspective (because that’s what growing up means: your youth is sold back to you), a stab at a more contemporary third generation made sense. The Vanagon sold poorly compared to the T2, but its “Crisp, taut, fresh lines” and off-the-grid genealogy earned it a devoted following that continues today.

The sales pitch does a lot of work: “The best of a van. The best of a wagon. And better than both.” The Vanagon was not as cool as a custom van, a fad that peaked a few years earlier thanks to creepy dudes, and it wasn’t as square as the station wagon, which the hippies’ parents had forced them to endure in the ’50s. It was also not as unwieldy as an RV—or as vulnerable to “high gasoline prices.” The Vanagon was “a totally new kind of vehicle” that sported a number of quirky features: a pop-up bed on the roof, removable benchseat (which sounds really unsafe, in retrospect), swiveling driver and passenger bucket seats, a tiny “icebox” in the base camper model, and “flawless interior design” that alleged “a breakthrough in ‘ergonomics'”—then a very new age-y concept defined here as “the practice of making a car fit you better.”

At times, the devotion I mentioned above verges on the cult. In 1980 or 1981, I took a trip to Yosemite with my friend and his family in a brand new Medium Blue Vanagon. My friend’s dad had talked about the thing for weeks before buying it, showed us the brochures, talked of the adventures they would have. When he brought it home, he was giddy, luminous. He showed us all the features one by one, including the battery stowed under the back seat. I don’t know if it was as “quiet” or “sure-footed” as advertised, but it was distinctively “sleek,” and we had a lot of room for comic books and Star Wars toys in the back; I still get a kick out of spotting them on the road, although appearances are rare these days.

The Vanagon was replaced in the early ’90s with the T4 EuroVan, essentially a minivan that followed the model launched by the Dodge Caravan and Plymouth Voyager in 1984. The ’70s had become the ’80s. Adventures in camping had become adventures in shopping. The hippies had become yuppies.