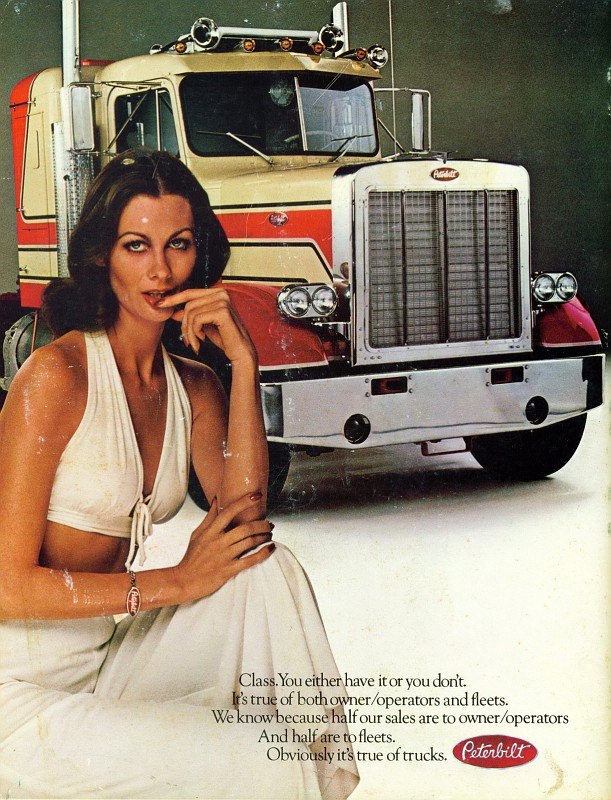 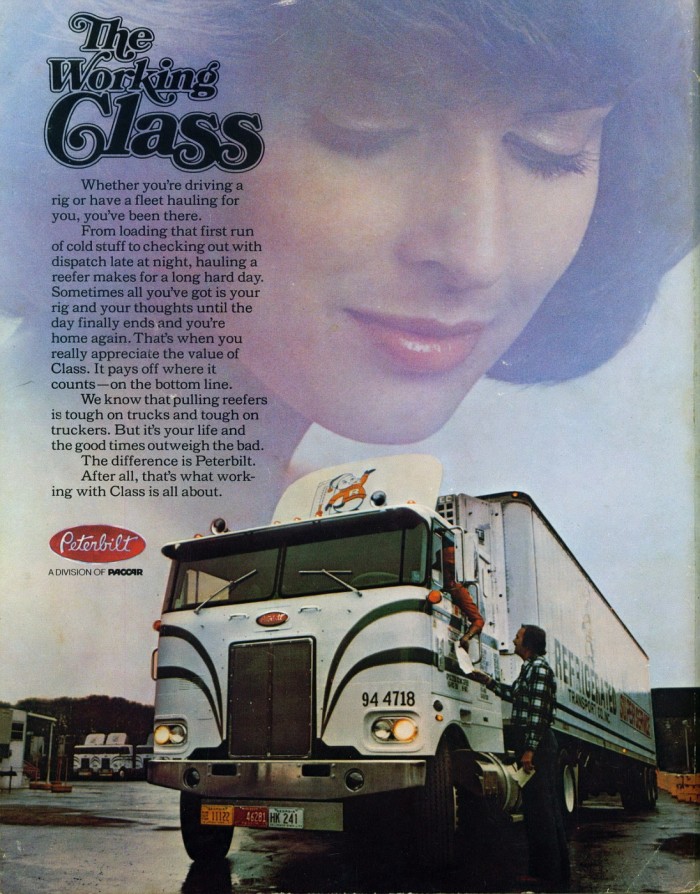 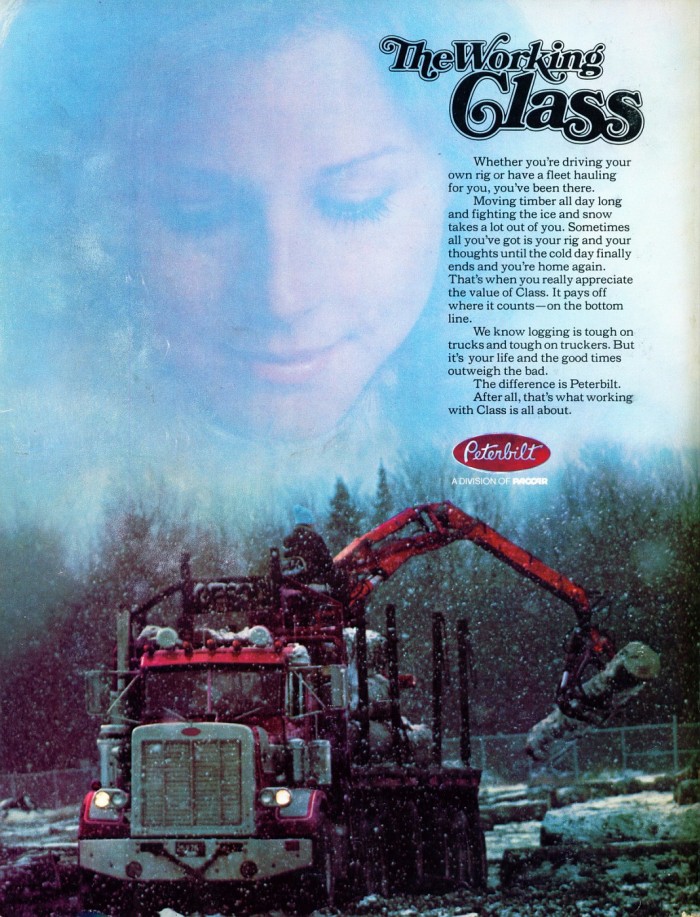 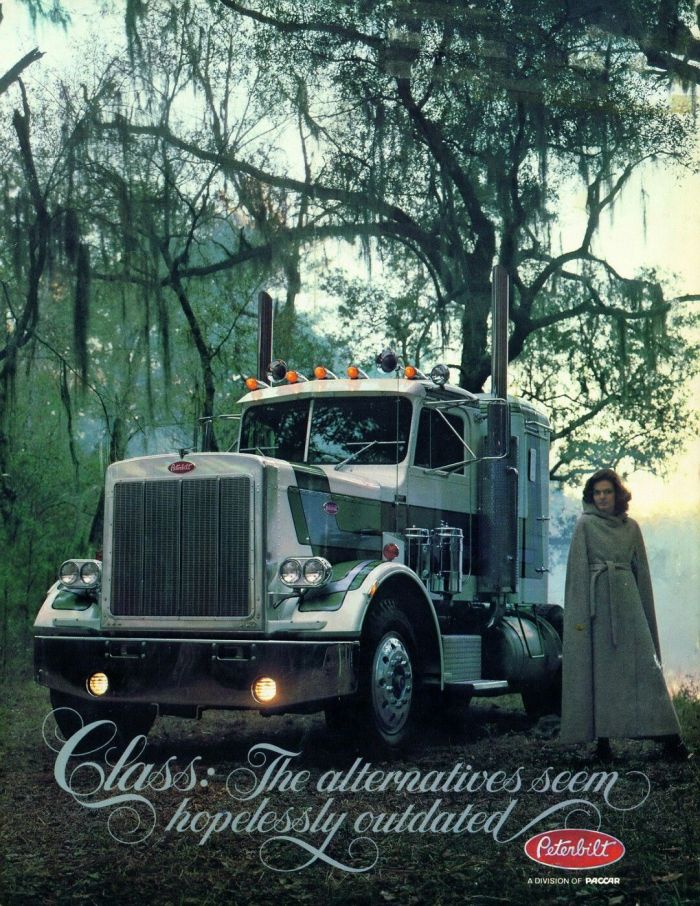 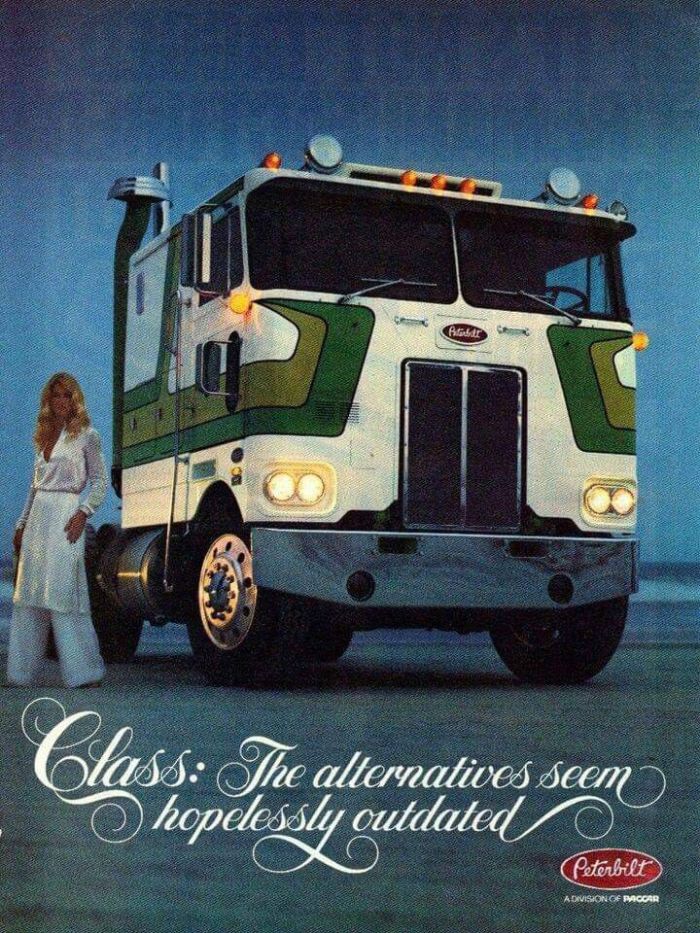 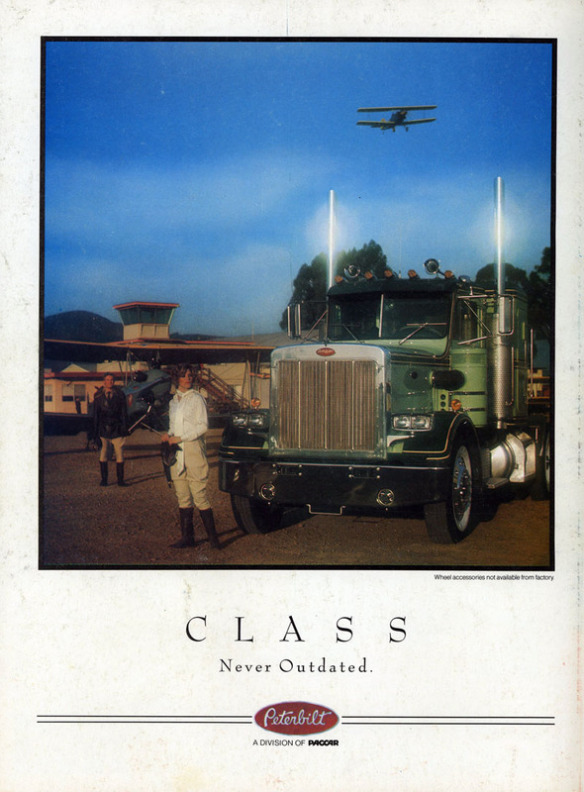 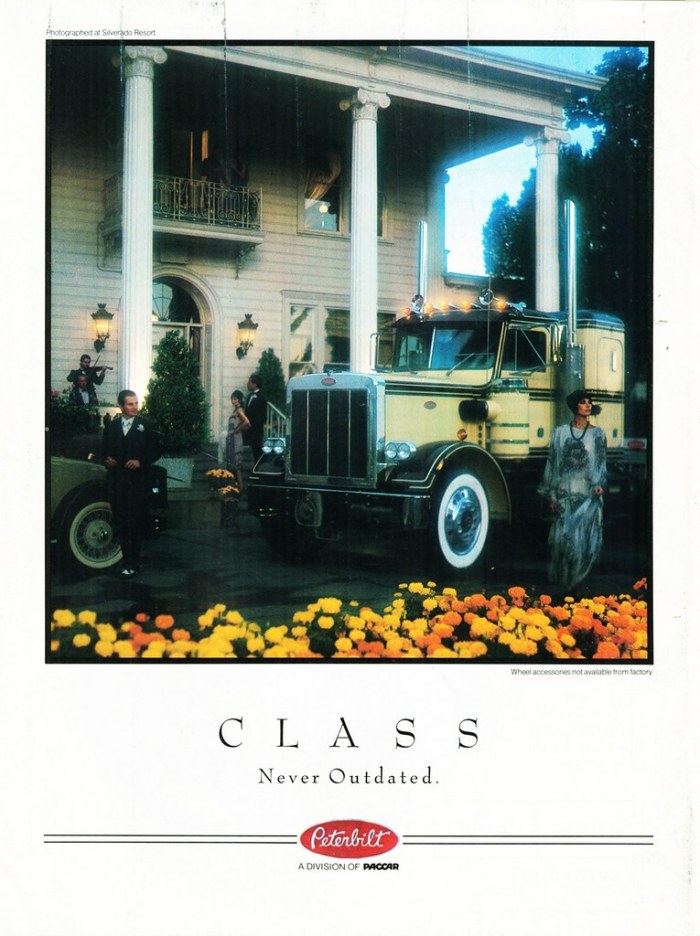 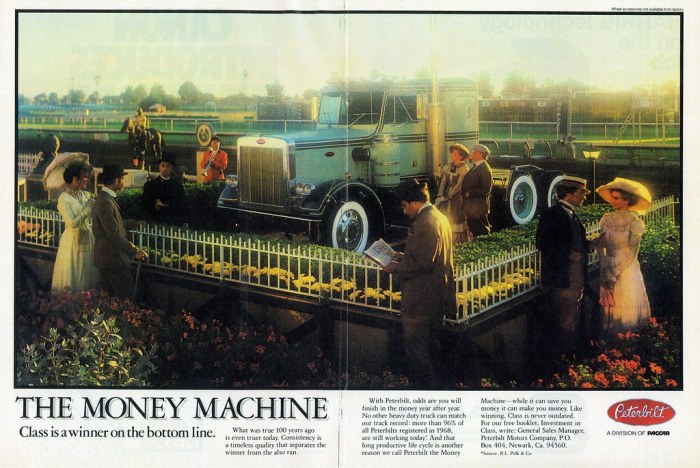 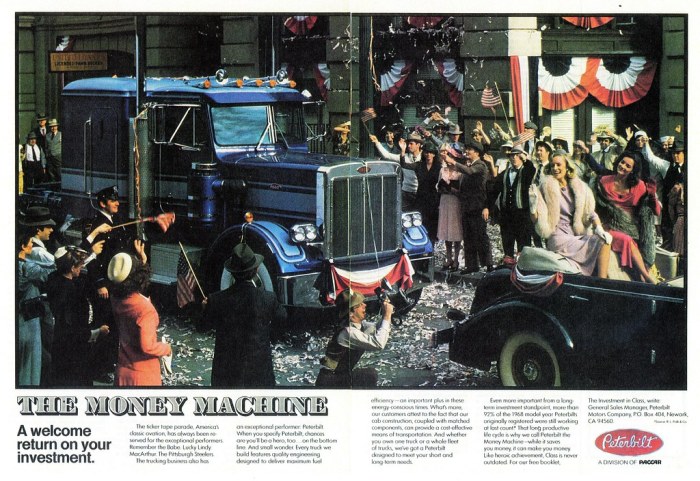 Heir to the role of freewheeling individualism once inhabited by the cowboy, over the course of the 1970s the truck driver grew to be an increasingly dominant figure in the American imagination. The US economy was facing recession and the haulage industry’s struggles with the oil crisis and the nationwide 55 mph speed limit (imposed in 1974 by the federal government) consolidated the truckers’ position as the nation’s proxy underdog. Despite this, one of the country’s best-known truck manufacturers opted for an approach to its advertising that runs oddly counter to the atmosphere of sweat-and-aftershave-soaked denim-clad machismo one might expect.

Founded in 1939, Peterbilt Motors was a commercial heavy- and medium-duty truck producer. Adopting “class”—perhaps as a play on the various Gross Vehicle Weight Rating classes—as its leitmotiv, the company had been using adverts that featured only women in what looked less like cheesecake than something from the fashion glossies since the late ’60s. The women featured in the earliest adverts shown here—from 1974—inspire curiosity about their role: are they simply intended to catch the eye of potential clients? Are they the trucker’s wives? The truckers themselves? Or are they perhaps the female spirits of the trucks?

This ambiguity comes further to the fore in the 1976 adverts, which are framed more like fashion plates than anything resembling an attempt to sell heavy industrial machinery. By this time, the CB craze was in full swing, the success the previous year of novelty hit “Convoy” having propelled the trucking lifestyle into the pop-culture stratosphere. Though the decade had begun with the trucker-as-evil-incarnate behind the wheel of the 1955 Peterbilt 281 that menaces Dennis Weaver in Steven Spielberg’s 1972 Duel, the films and TV of the ’70s were saturated with positive images of male truckers, from NBC’s Movin’ On, which debuted in 1974, to 1975’s White Line Fever and 1977’s The Great Smokey Roadblock, to 1978’s Every Which Way but Loose and Convoy (inspired by the song) and TV’s B. J. and the Bear (1979-1981).

But despite all the testosterone in the cultural well, the company’s ads seemed to be attempting to speak specifically to women rather than to men. A parallel series of adverts, also from 1976, evoked adventure and romance, promising, “It can only happen in a Peterbilt.” Could anything be more incongruous than the juxtaposition of a big rig, lights gleaming and air horns ready to blast, with an intimate picnic where wine is served and candles blaze? The picnic blanket is laid for two, but, again, there is no sign of a man. Is he taking the photograph? Simply having a pee out of frame? The picture remains enigmatic.

The 1977 ads continue to feature only women, though now in a slightly different guise. Are these faces looking kindly down upon the vehicles meant to represent domestic angels of the hearth, their thoughts turned protectively to their hard-working husbands, or are they supernatural deities of labor, watching over their human charges? I prefer to think it’s the latter.

Most of the women in the 1970s adverts, in fact, seem somehow goddess-like—human incarnations of the beautiful, powerful machines they stand beside. As the new decade dawns, though, and Ronald Reagan becomes president, the mood changes. Women remain the focal point, but the adverts start to look to the past for their atmospheres, the settings becoming antebellum riverboats and 1920s mansions, and the women in them objects to be gazed at by the men who now start to populate the scene. And by the time we reach the 1981 adverts, women are once more simply part of the landscape: a girlfriend, or a film star to be gawped at.

Peterbilt’s publicity of the 1970s seems to speak to an unvoiced desire for elegance, beauty, and romance—the “class” the 1974 ads claimed as the reality of the American dream. Hardly the psychological language we might expect from a truck advert, nor the kind of dream the bullishness of the following decades might imply. Was it perhaps a question of prudery, religious or otherwise, in the upper echelons of the company’s management? Maybe a subterfuge to reach the target audience through its wives? Or was it actually an attempt, conscious or otherwise, to broach women’s changing position in society? We will have to wait for someone more au fait with the ins and outs of the 1970s trucking world to tell us, because I’ll be fucked if I know.