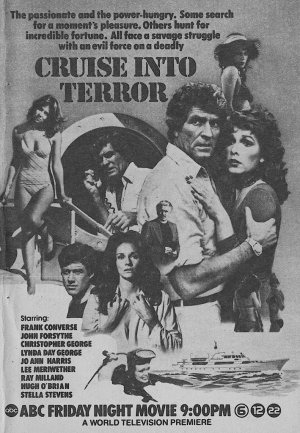 World-weary Captain Andy Andrews (Hugh O’Brian) never smiles, but he is especially not smiling today. The company’s luxury liner was overbooked, you see, and he’s been ordered to take eight passengers 800 miles to Mexico on a busted up “battle wagon” (in fact a midsized pleasure boat decorated with ferns) with a broken port engine. Andrews refuses, and is hit with an ultimatum by the line’s director (Marshall Thompson): “Are you gonna take the Obeah to Mexico? Or are you gonna look for a job in the Bolivian Navy?” Andrews, as you’ve probably guessed, chooses poorly. Then again, Obeah refers to an alleged (by white people) type of evil Caribbean sorcery, so he kind of asked for it.

The director, from his office that is for some reason smack in the middle of a warehouse chock-full of giant cardboard boxes (spoiler alert), quickly places a call, telling the other line that the deed is done before hanging up and asking God to save his soul. Enter menacing tribal chanting over a Jaws-like theme (it will occur throughout the movie, and it is a joy) as a runaway forklift rams a stack of giant cardboard boxes (told you) that squash the director.

Mr. Lazarus is familiar with Dr. Bakkun’s work on “Mayan-Egyptian cross-culturization,” obviously, as we find out during happy hour on the first night. “Ancient Egyptians sailed to Mexico 2000 years ago and founded the Mayan civilization,” the good doctor explains to the skeptical passengers. His evidence? A piece of papyrus revealing that Cleopatra ordered a tomb built “where the sun hits the sea.” I’m not sure how that narrows anything down, but apparently his “calculations” prove that the tomb is on the island of Cozumel, directly off the Eastern coast of the Yucatán Peninsula—the destination of the Obeah.

Strange occurrences begin: Debbie nearly falls overboard when malevolent red eyes encroach in the darkness. But Debbie, because she’s somewhat intellectual (i.e. she wears glasses and reads books), is just “high-strung” and “hysterical.” What she saw were the lights of the channel police, says the Captain. Meanwhile, looker Judy is getting it on with Simon, who is only fulfilling his obligations as the “entertainment director.” Mrs. Barry and Mrs. Mather are not so lucky: their husbands both spurn their sexual advances, Mr. Barry because he’s a bigshot finance director and a giant asshole, Reverend Mather because he’s trying to impress God by doing “penance for the years I spent worshiping the bottle.”

The physicist “whiz kid” has done some independent research and concluded that Dr. Bakkun’s “calculations” are for shit: the tomb is actually 41 miles north of Cozumel. And sure enough, that’s exactly where something called the the injector pump breaks. Everyone wants to raid the tomb except for the good Reverend, who thinks “the dead should be allowed to rest in peace,” but Bakkun has “waited for this moment my whole life” and will not be swayed by “Biblical fantasies.”

Ms. Magnesun uses this opportunity to hit on the Captain, sensing he’s “spooked”: “Oh, I pick up on things,” she coyly brags. “Sometimes I know what people are thinking before they know.” Is she “some kind of a witch,” the Captain wants to know. “Well, some people might pronounce it a bit differently,” she says, “but like I said, I do read minds, and yours looks like some pretty heavy reading.” Is that a smile lurching across the Captain’s stony face?

The passengers take a dive and dig up an Egyptian tomb plate, to the orgasmic delight of Bakkun. The Reverend, who can apparently read ancient Egyptian hieroglyphics, explains that the plate specifically warns against desecration. Also, according to Bakkun’s own papyrus, the tomb (despite all the big brains in the room, no one seems to understand that the tomb has already been desecrated) is to be opened every thousand years for inspection. The last time that happened, the entire Mayan civilization disappeared without a trace. “Something evil” resides inside, the buzzkill Reverend declares, “something waiting for the next millennium.”

The passengers haul up the sarcophagus in short order. It is… much smaller than we were led to believe, but big enough to make dollar signs dance in Neal’s head. Nathan, left in the water like so much chum, is soon “buried under a thousand pounds of rock.” But there’s no time to mourn! The passengers want to take the sarcophagus back to the States and cash in, but the Captain gives them a quick class on maritime law: the salvage belongs to the ship. The Reverend wants to destroy the cursed thing “before the seal is broken on the lid,” because “the son of the evil one is inside, the son of Satan.” Evidence? He reads from a book called the Key of Solomon (a real Renaissance grimoire that has nothing to do with the Bible): “where 12 souls gather, the child of Satan shall be lifted from his bindings,” and so on. One of the 12 is his “guardian”—“One by one, he’s going to take us all.”

Ms. Magnesun uses this opportunity to bed the Captain. During the post-coital cigarette, Cap reveals that it’s his last trip; he’s making all the wrong decisions (he sure is) and feels guilty about Nathan’s death (as he should). Ms. Magnesun tells him something her father used to tell her: “That there is a devil, there is no doubt. But is he trying to get in us, or trying to get out?” She wants the Captain to “let [his] devil out.” Now, unless this is her roundabout way of asking for seconds, I believe she has completely misunderstood the point of her dad’s creepy rhyme.

Thunder and lightning. Lustful Lil has had enough: she must have sex. After making eyes at the heaving sarcophagus, she visits Lazarus’s room unannounced, breathes heavily, and drops her nightgown. Minutes later, disheveled and stumbling down the hall, she meets the Reverend, starts speaking in tongues, and tries to choke him to death. Meanwhile, Neal has become increasingly obsessed with cashing in on the sarcophagus, even while Sandra reasons that it’s clearly evil and should be thrown overboard. “We came on this cruise to be happy again,” she pleads. His response is the best line of the movie:

Happy? And how do you plan to work that miracle? We’re a little old to find happiness on a beach in some sleeping bags like a couple of hippies. Happiness has a price tag, Sandra. It costs money.

Dr. Bakkun comes to his senses, grabs an axe, and tells the baby devil that he’s going to chop him up. Bad move: devil baby shakes the ship, toppling Bakkun, and the sarcophagus launches itself off the table into Bakkun’s face. Neal threatens the physicist into teaming up with him and removes the sarcophagus to his cabin for caressing and safekeeping. They need to get it to the launch before the Obeah docks in Mexico and the treasure is confiscated. But the Obeah is dead in the water, and Simon has to take the launch to get help. The guardian reveals himself, but the Captain still believes there’s a logical explanation. The Reverend strongly disagrees, chucking a couple of gas lanterns at the sarcophagus (and poor Carina, who has snuggled up to it)—“to the flames you shall return”—and wrestles with the guardian. Lil, her trance broken, sticks with her man to expire, along with the guardian and the devil baby, in the flames. The survivors escape in the launch before the ship explodes (an explosion lifted from a production with an actual budget and clumsily overlaid onto the Obeah), and the Captain concludes with a morose voiceover log entry. He will never smile again.

I have spent much too long describing the plot of a 1978 TV movie called Cruise Into Terror that is very obviously a rip of the greatest telefilm of all time, The Horror at 37,000 Feet, but I couldn’t help myself. There is magic here. Good magic. Hugh O’Brian utters every word with the gravitas of a Rod Serling-narrated Twilight Zone epilogue, and at one point the Captain, Bowie knife in hand, quite literally stares down a shark. Christopher George is spectacularly over-the-top, as was usual during this stage of his career. Milland is a treasure, and I won’t hear otherwise (he too would go on to star in Battlestar Galactica as the debauched Sire Uri). And the sarcophagus! It really breathes, with accompanying heartbeat sound effect! Ultimately, that’s what seals the deal for me. The ’70s were a golden age of paranormal media and pseudoscience and urban legend, and the idiotic and recycled occult theme feels like home. Also, I’ve got a thing for boats (see below).