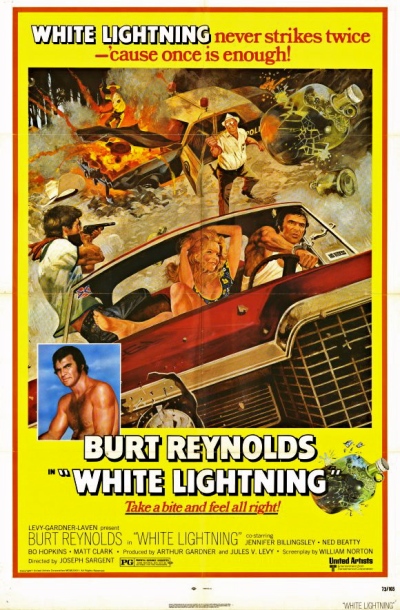 White Lightning is the first in a long line of films and TV series about righteous lawbreakers in the post-Vietnam American South, where corrupt cops chase hot-rodding bootleggers and paid-by-the-mile truckers through the meager towns and backwoods scorned by “the people in Washington.” It’s a mythical land whose isolated, protective communities both resent and revel in their perceived marginalization. These films are anti-establishment but also anti-counterculture, sort of an ideological counterpoint to 1969’s Easy Rider, a cribbing of the heroics of 1967’s Cool Hand Luke, whose Southern protagonist was sentenced to a chain gang for a universally admirable crime: destroying parking meters.

As the film opens, two canoes, one of them towing the other, move quietly through the swamps of fictional Bogan County, Arkansas. As the leading canoe crosses the camera, we see what is clearly a police officer, as well as a portly man wearing a straw fedora, glasses, and a pocket protector—he might be a used car salesman, or a math teacher. As the second canoe passes, we see two young men gagged and bound to cinder blocks; they are terrified, desperately trying to get loose. The man in the glasses stops rowing and calmly picks up a shotgun, putting one round into the back of the boys’ boat. The boys struggle manically, pulling and clawing at their ropes as they disappear beneath the water. The other two men start rowing back where they came from; they don’t look back.

The killer is, in fact, J.C. Connors (Ned Beatty), the Sheriff of Bogan County. And we find out in the next scene that one of the murdered boys, Donny, is the younger brother of Gator McKlusky (Burt Reynolds), currently doing time for bootlegging—a pursuit he’s been at since at least the age of 13. Gator, shirtless, is joking around and doing easy time in the prison garage when we first see him. The prison warden (Lincoln Demyan), himself a well-known moonshiner, sends Gator along to a visiting cousin, who breaks the news about Donny. It’s “on account o’ the kids he hung out with,” she explains, weeping. “All them protestin’. All them damn hippies.” Gator tries to escape a few days later, but is caught and given hard time digging trenches. We see him for the second time without a shirt, as he seethes at his helplessness and gets a talking-to from the warden; but it’s not exactly a gratuitous shot of Reynolds’ sweaty physique: he’s got a tattoo of the U.S. Marine Corps insignia on his right arm, and, though it’s not stated in the film, the implication is that Gator is a veteran of the war his brother was killed for protesting. Gator tells the warden that he wants to make a deal with the Feds (“Federal law got me in here, didn’t it?”): he’ll get them Connors, who takes a cut of all the bootlegging in Bogan County, if the Feds set Gator loose. A couple of Treasury agents show up and give him what he wants.

When Gator comes home, he has to explain to his aging parents what he’s about to do. His “daddy” (Dabbs Greer), a former moonshiner turned farmer, walks out on him for even contemplating “takin’ down names of liquor people,” and the conflict in Gator is obvious. Moonshine and bootlegging are not just a community glue where he’s from; they’re acts of resistance against the larger Union, and now he has to choose between ratting out his own people and revenging his brother, who belonged to an upstart, big city movement that disdains just about everything about the South. Even J.C. Connors, racist and murdering shit that he is, understands the justice behind moonshine: none of his men “make enough off a taxpayer to buy their seven dollars a fifth for government liquor…”—but “shine is six bits a pint.”

Soon we meet probation-vulnerable Dude (Matt Clark), yet another “white lightning” runner and fast car fixer-upper, who leads Gator to Rebel Roy (Bo Hopkins) and his flirtatious wife Lou (Jennifer Billingsley). One of the best scenes in the film has Gator, early on, pull up to Connors in the street, revving his engine, provoking him, but also trying to earn the Sheriff’s trust as a runner. Dude sits between them in the passenger’s seat, scared to death. “Only two things in the world I’m afraid of,” Gator tells Connors, with a smirk that would soon become world-famous: “Women and the po-lice.” Gator quickly gets his shot as a “blocker” for Roy, and obviously acquits himself like a true “good ol’ boy,” which lands him an introduction to the unhinged Big Bear (R.G. Armstrong), the biggest supplier of the area. All goes according to plan—until a Fed mole tells Connors what Gator’s up to.

White Lightning and its better-known (but not better) 1976 sequel, Gator, were written by William W. Norton, a World War II veteran who joined the Communist Party in the 1950s and was arrested in 1986 for attempting to run guns to the Irish Republican Army. Both films, though they are clearly for the South, seek to repair the image of the South after Bull Connor (clearly the inspiration for J.C. Connors) and sheriff Jim Clark, and after the suddenly believable redneck horrors perpetrated in 1972’s Deliverance, which featured breakthrough performances from both Reynolds and Beatty. Gator is pointedly not a racist and not a mindless redneck, and, while he may snub his nose at “those goddamn, long-haired hippie freaks,” he doesn’t begrudge them their right to exist, their right to speak their minds. In Gator’s version of the South, those are fundamental liberties, just as down-home as being a gentleman, hating the Feds, and making and running moonshine.

Although the collision of the dueling political attitudes of the time drives the plot and subtext of White Lightning, it’s at heart an action film, as the outrageous poster makes clear. But, while the car chases are lots of fun—stuntman Hal Needham and Reynolds became friends, and Needham went on to direct Reynolds in the second highest-grossing film of 1977, Smokey and the Bandit—it’s the quieter moments that stay with me: Gator’s first ride in the souped up Ford Custom 500 after getting out of prison, his talk with his folks, when he’s trying to convince Dude to help him nail Connors, when he drives past the swamp in which Donny was drowned. My personal favorite: after running some ‘shine to the local bar and the local church(!), Gator, Roy, and Lou stop off at a diner, where a group of college students are in heated conversation about politics and life. Gator awkwardly, almost shyly circles their table, finally asking one of the young women if they go to the university his brother attended. No, they don’t; they go to the local junior college. They forthrightly ask him a question he can’t answer, about something trivial, and Gator melts quietly into the background. Even though the thirty-something ex-con and the younger generation try to engage one other, even though they share the same accent and the same culture, they no longer share the same language or the same ideals, and it hurts Gator, because he realizes he never knew the brother he loved.

At the end of the film, just before the final car chase, a wounded Gator is being sheltered at a home for unwed mothers (where Lou was once a guest), one of whom tells him she knew Donny. The story comes out that Donny was the one to “pick the worst county in the whole state to hold the demonstration” (a sit-in); he was the one who told Connors that he needed a search warrant to enter, who called Connors a “fascist pig mother” when the Sheriff broke it up. Gator laments that he “ain’t never done nothin’ good my whole life,” while Donny was “the only one who accomplished anything.” He shakes his head, asking the question he knows has no answer: “What the hell’s it mean?”

2 thoughts on ““All Them Damn Hippies”: Joseph Sargent’s ‘White Lightning’”