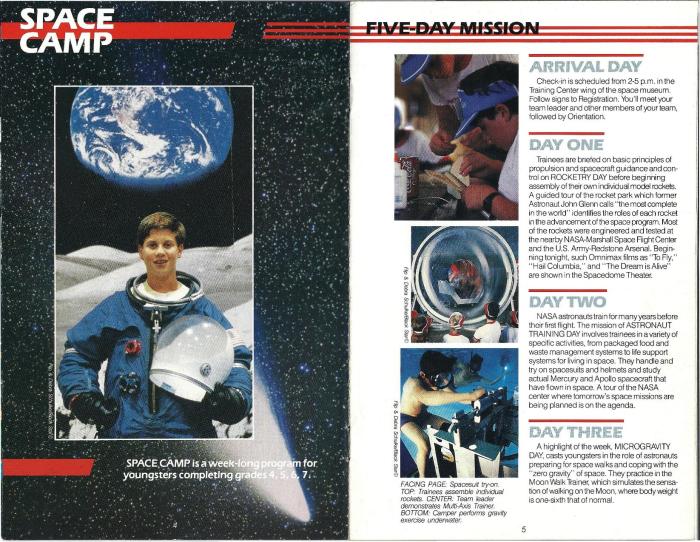 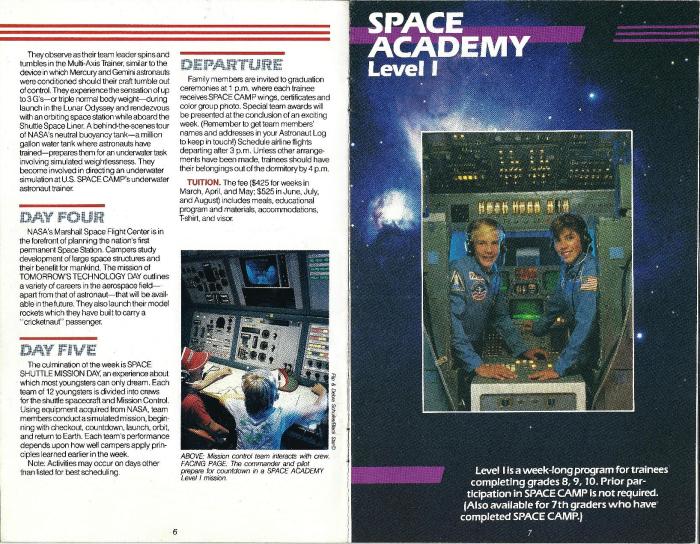 Space Camp was inspired by Saturn V designer Werner von Braun—a longtime advocate of a “public program for space science education“—and pioneered by Edward O. Buckbee, a NASA public relations specialist and director of the U.S. Space & Rocket Center in Huntsville, Alabama, the location of Space Camp since its inaugural session in 1982. To date, more than 800,000 kids and adults have graduated—from all 50 states and 150 countries. During Buckbee’s tenure (he retired as director in 1993), the program saw tremendous growth in both enrollment and scope, with additions including Space Academy I (grades 7-10), Space Academy II (grades 11-12 and college freshmen), Space Academy for adults, Space Academy for educators, and Space Academy for families.

Only two years removed from the Challenger Disaster, this 1988 brochure (see the complete document here) still aches with innocence and promise, Buckbee’s introduction placing would-be “trainees” on “the threshold of an incredible journey: life in the 21st century” and invoking a mission to the Red Planet: “It’s quite likely that the first American to walk on Mars is about your age right now. You can help put that person there. Or be that person yourself.” The 1986 film SpaceCamp, starring Lea Thompson, Kate Capshaw, and Tom Skerritt, accelerated awareness of the program, as did a Boy’s Life cover story from the same year. Despite doing poorly at the box office—it was released less than 6 months after Challenger—the film was much adored by the Star Wars generation (myself included), and remains a beautiful expression of the idealism, daring, and communal vision that inspired Space Camp in the first place.

The only down side to the camp was, of course, the expense. Session dates (from three days to 10 days) in 1988 ran from February through December, and cost between $1,000 and $2,000 in today’s money, not including travel. Even more than the Atari summer camps (and, yes, Dungeons & Dragons camp) of the same era, it is hard to imagine something I wanted more, even if the experience didn’t really offer “the most exciting and rewarding opportunities on Earth.” And yet here it is in ideal form, frozen in this 27-page brochure assuring parents that their 4th graders will be met at the airport gate by a “badged team leader” and reminding campers to bring shorts “in good taste”—the dream behind Mercury and Genesis and Apollo, and the antidote to the mercenary and ludicrous “Occupy Mars.”

Space Camp is alive and well today, and scholarships are available.